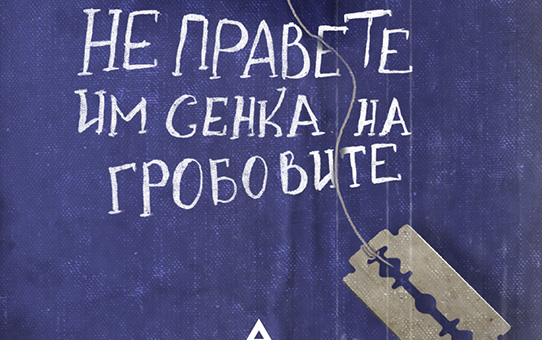 On the last morning of March, Stasha was drinking her coffee outside, absorbing the sunshine, as if she has been living from photosynthesis. Many times, her mother would tease her that by eating almost nothing, it really looks like she lives from photosynthesis. She attributed her anxiety and melancholy to the lack of food exactly.

Stasha has never been listening to the criticisms directed to her, which was often the case. Maybe exactly due to that anemia she has been living with since her early age, she didn’t have or won’t go give off a part of the energy, she had enough to keep her barely living – thinking about those criticisms.

It all started when she was still a child when her grandfather passed away.

She didn’t understand why everybody was mourning about her grandfather’s passing on “the other world” – as her mother had explained to her.

–           Uncle, I don’t understand how he is supposed to go to the other world, after being buried in the ground by you? – she said disappointedly then.

–           The Earth will keep his body, so his soul would travel more easily because, in the place where he goes, he will not need the body anymore. Everyone craves for that riddance – her uncle explained to her, who was much younger than her mother.

– Then, why is everybody crying, don’t they want grandpa to be free?

– They do, but the body is what we are noticed by and that is the only thing we are differentiated by. They don’t cry for your grandfather, they cry for his body because it disappears. We will all miss that huge figure that made him look as he had been feeding on mountains – the uncle tried the easier way to console little Stasha.

– And now, what is going to happen to his body? If he had been feeding on mountains, as you said, would mountains now feed on him? – she asked.

–           So, why everyone is crying, if they can see him whenever they want, by coming and removing the soil from him and see him? – she was persistent.

-Because his flesh will be eaten by worms, and only bones will remain! – her uncle answered angrily.

-So, who is going to eat worm’s flesh, after being covered by soil? – she asked, still young enough not to feel the pain of that.

–           Nobody eats worm’s flesh, because they had already been fed on flesh. On decayed flesh! – her uncle was losing his patience more and more.

From then on, she almost stopped talking. Though nobody paid her attention in that grotesque farewell, from that moment she became a completely different child.

She no longer enjoyed children’s games. She would bury anything under the ground, in order to feed up the worms, so they won’t starve to death by no means and after being buried in the ground herself, nobody would eat her flesh, so she would have to shamble on that other world, everyone was speaking about and who knows when she would get there.

Therefore, every time her father would bring her caught fish, she would hide a few of them, burying them in the ground, in order to leave food for worms. When there wouldn’t be any fish, she would run through the yard, chasing sparrows, in order to bury them in the ground as well. That’s why she would barely eat because she was thinking it’s worms’ job, they would desecrate one’s existence, and she was also afraid of not being eaten by worms completely if she eats that much.

As time went on, and she was growing up, she wouldn’t be interested in worms’ role anymore, now she wanted to forget it. Not for herself. She wanted to forget it for the sake of her parents, who she didn’t want to imagine being eaten by worms. It didn’t matter to her anymore if they would easier travel with their bodies to the other world. She wanted them on this world, a desire she didn’t know how to express, other than hugging their bodies.

Therefore, after growing up, whenever she would see a worm, she ate it. As if she wanted to take revenge on them for what they are going to do to her parents in the future.

She would spend her mornings on the balcony, rummaging through flowerpots with soil, where she would always find a worm here and there, and she was furtively swallowing them. Her breath smelt of worms, which she never chewed, instead she swallowed them directly. She didn’t want to end their sufferings, therefore she had been creating a worm’s kingdom in her stomach. She would sometimes feel them crawling inside her stomach and by using a glass of water, she would put an end to their rampage, as if she wanted to explain to them who is in charge here.

It was her mother who had distracted her from that thoughts, holding a piece of cake in her hand, a part of which was in her windpipe and she was unsuccessfully trying to cough it out.

She started throwing up pieces of meat and unswallowed cake. She was throwing up very long, as a worm who have been accumulating everything on himself, due to long-term devouring and she didn’t know what to throw up first.

Stasha, while looking at pieces of flesh that had come out of her mother’s stomach, started throwing up as well, spewing out all the worms she had been keeping in her stomach for a long time.

Worms, as awakened babies full of new energy, were moving down the trails of food towards her mother. They slowly started crawling up, conquering each part of her body, and their starvation didn’t wait for her to be covered by soil. Throughout all her body, they started to dig holes, through which Stasha was trying to see her mother’s soul. She was looking for it again and again, but she didn’t see it, even though the holes were becoming bigger and bigger.

-Stasha, don’t you see I would have almost choked up? – her mother reproached her.

-I’m sorry, mom, I was deep in thoughts – replied Stasha with watery eyes, for the first time accepting the piece of cake given by her mother.

-This is for your grandfather’s soul – added her mother, visibly surprised by the relish Stasha was eating the cake with.