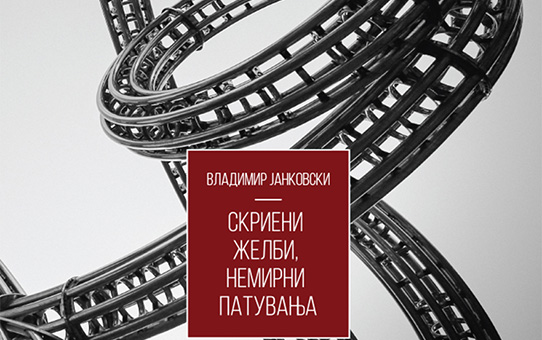 Martin is almost closing his eyes, so he could even stronger feel the scent of the woman standing in the elevator in front of him.

The elevator is yet to pass four floors to reach the top.

In the next moment, the lift door is opened, the woman dynamically steps out.

She will disappear from the city forever, turned into a memory of one possible crossing paths.

Martin will never learn her name, her occupation, and what her obsessions are like.

Her name is Anastasija Dimeska, a 43-year-old pharmacist. She doesn’t like her job particularly. She is the younger sister in the family of medical doctors. In her teens, she had been obsessed with the most disgusting children in the neighborhood. It has been three years since she lives with Aleks, a real estate agent, and Italian football devotee. Anastasija doesn’t want anything in a fantastic manner. She thinks of herself as someone adept at determining the volume of things. That is right. In her thoughts, she often responds to the questions of imagined interviews. Her regret: she cannot live a few different lives simultaneously. Her wish: to choose her life in the mornings, the same way people choose what to wear. When in front of a mirror: she enjoys the face looking at her.

Pavel is sitting on the metal seats, observing the names of the cities on the passanger infromation display system. On the seat across, an Asian woman, fixedly, almost without any distance between her eyes and the screen, scrolling on the tablet. Next to her, a female friend of her, or maybe a co-traveller only, carefully observes the faces of people making their way from the safety controll to the waiting room. She is concentrated on their faces, movements, she observes them as if she is going to find an answer to a question she asked herself long ago.

The abundance of the moment. That’s how Pavel could describe this situation, in which crowds of people pass through the warm throat of the airport. .

Pavel keeps looking around casually, he is not a type of person who would keep looking at one place for a while. He is observing people who are sitting, most of them staring at their cell-phones, logged on the most popular social network. They stare at the banallity of other people’s lives.

The airport is a mill of thousands of human existences, which will come close in the next few hours, pass through the common strainer, before being strained on the other side, scattering to all directions. It would be a real miracle if some of these stories, connected with the help of this place, come across each other again. For Pavel, that not-coming-across, have been always relieving.

All of a sudden, the girl who was sitting next to the tablet-girl, is getting up, making a slow circle around the waiting room, a typical activity for such situations, and stops in front of him. That is the first oddity for now.

-Excuse me, may I ask you something – she speaks well-practiced English.

-Yes, of course – his English is a bit more casual.

-Can you tell me your story?

-Your story. In few sentences. No more than ten.

Pavel’s look says he needs additional explanation. The stranger understands the meaning of that look. She resembles a person well trained to understand other people’s needs. Therefore she pulls from the inner pocket of her coat a cell phone, which will be used as an audio recorder. Each her movement is in a harmony with the following announcement.

-Most often people require an explanation from me. I tell them whenever I have the opportunity, I travel outside my fatherland, I’m born in Sweden. During travels, I record casually chosen people. Of course, in case they agree with that. I record them telling some of their stories. About them, about someone close, something they are intrigued about. Before that, they only have to tell me their first name, last name, and the town they are coming from, I ask some of them about their age… but that’s not by definition. That’s what I have been doing – I collect their stories about themselves. Would you mind giving me yours? Would you mind if I audio record you?

He is looking at the Asian Swedish woman.

Love the moment, be nice to it, indulge in it, without expecting anything in return.

-No, but there is one condition.

-I’m, gonna do what you ask from me, but in my language, Macedonian language. I’m Pavel Firfov from Skopje, Macedonia. A country in Europe, South-Eastern Europe, to be more precise, I don’t know if you have heard of or have been…

Then the voice of the public address system announces the boarding on the plain for Istanbul, Pavel’s flight.

-And you are flying to Istanbul as well?

-It means I have a little more than two minutes to tell you what you are asking from me?

The girl is handing her cell phone to Pavel.

David is laying on the bed in his room, observing the ceiling where his mother, before giving him birth, had painted a sky toward which girls in wide dresses take off, having fish fins instead of hands. He has been looking at that ceiling for years, without having it enough, and without the desire to repaint it.
Next to him, on the orange bed, an instrument is placed. The left hand gently touches the varnished body.
He is 22 years old, and tomorrow is one of the most important days in his life – the concert that will determine what will happen with him and his instrument.

On the street, the city is nervously whipping its residents’ faces. It is doing so by the sounds it creates, by looks it creates, by the air people are forced to breathe.

Martin stops by the business center, taking those severe hits. He is being very familiar with them, and more than that, he loves them. He can stand it lately in that way only – through its cruelty.

Although in this moment, the trail of the scent of the woman in the elevator, is the only lasting trail of Martin’s face.

Urshka Lovrenc from Novo Mesto, Slovenia; biography in one sentence, in second person

You are the one who thinks every human being carries withing herself or himself a little weirdo, and life is turning into sadness when we allow that weirdo to sleep in us too often.

Bistra sends the excel check she had worked on all the morning, then throws a look to the big office window.

The night rain, in partnership with the dust on the glass had drawn a figure: a woman with five heads.

She gets up from the chair, the office is empty, her colleagues are out for a break. She glues her face on the cold glass. The sixth head is hers. Or she becomes a woman with six heads.

The city is quite and capricious down there, a doted lover without a clear idea on how he wants to end the night.

Bistra’s index finger draws one sentence on the cold body of the glass.

Nobody will ever read this sentence.

She doesn’t mind that – she is not a type of person who wants to leave a mark, to be remembered, mentioned.

Best are those photographic portraits that behave a little bit rude to the photographed person. They don’t allow her or him to take up a position, to offer the best image of herself or himself. The real portrait is happening in the moment when the controlled image we want to deliver to the others is disturbed, to those across from us, those we wish to be liked by. The real portrait has to be a violation of falsity… I think it’s my very job – using my camera, to catch the falsity in the moment it bursts out.