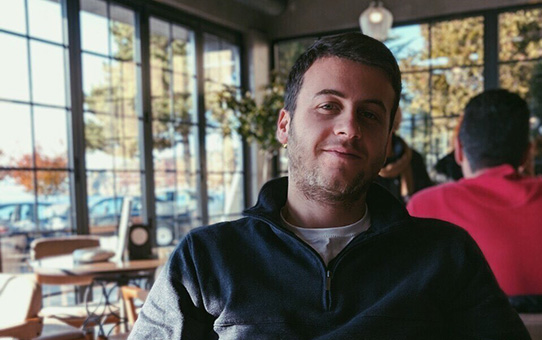 Dimitar Dimoski was born on January 15, 1992 in Ohrid. He graduated from the Faculty of Economics at UKIM in 2015. In the same year, he continued his formal education at the postgraduate studies of the Film Institute, Film Academy Ohrid, at the Department of Creative Production. He is a screenwriter of several short films, and works as a film and festival worker. With his projects, he has participated in several workshops throughout Europe. Since 2014 he has been an active member of the literary club “Grigor Prlichev” from Ohrid, where through weekly literary meetings at the Ohrid library, he seriously begins to study the craft of writing, and also regularly participates in the activities of the club. In 2014, with the short story “World Builder”, he won an award at the short story competition “Nova Makedonija”. In 2015, he won the competition “Zivko Chingo” with the short story “My house in the Krs’ Dzamija”, and in 2016, he won second prize at the competition “Nova Makedonija” with the short story “Silent Films”. His stories have been published in several newspapers, magazines and Internet portals. The collection of short stories “Silent Films” is his debut work.