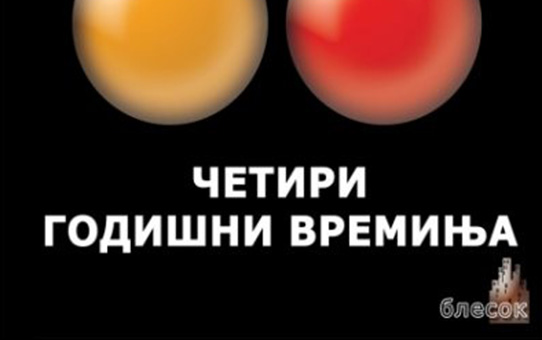 From the book “Four Seasons” by Elizabeta Bakovska.

It was on the day of the funeral that she saw her father naked for the first time. They changed his dried, thin and sickness tortured body on the couch in the living room, on the same spot from where he had watched TV for years. They changed the deceased with an agility and speed that one has when he must do something, led by his desire to finish as soon as possible. The weight of the body that lifelessly lied in their arms was not compatible to the fact that it had shrunk, and they lifted him with difficulty while some dead liquids gargled in his chest, creating the illusion that something inside that empty body was still alive. He was changed by others, but she stood there, from time to time trying to help by pushing the hand with the long fingernail on the pinkie inside the sleeve of the shirt, pulling the socks up her father’s feet, soaked for years in some waters and wrapped in some leaves so that his toenails do not grow into the flesh, and tying his jaw with his artificial teeth in with a handkerchief so that it does not open.            The naked body of her father that was already turning yellow and cold quickly hid in the new underwear and shirt, and they pulled his best suit on top of it, the one that he wore at her wedding.

Her mother and father never had a wedding, her grandmother told her once. They simply eloped. Or, better said, her mother eloped with him, and her father took her somewhere, gathered his colleagues from work to sign as witnesses and that was it. That was how her mother had made the decision that determined their lives forever. And she remained at this decision even that single time when she told her that she loved her. When she left home that time, her mother came to call her back. Her face was blue and swollen, when she ordered her to return home with her teeth clenched and her voice strict. Tears run down her cheeks at the moment she saw her. Never before had she felt how it hurt when somebody who had given you life suffered. “Why are you crying?” her mother mumbled through her swollen lips. “Because I love you.” She said the only think that she could say at that moment. “Divorce him.” She told her the only other thing that came to her mind. “It’s none of your business.” Her mother hissed coldly. At that moment, she realised for the first time that maybe the life of her parents was indeed none of her business, that her mother’s fate was not her fate, and that everybody chooses his way, and decides whether to stay on it or leave it when he understands that the way chosen does not lead anywhere.

When she thought about the years passed at home, she felt that she had never known what she would find behind the door which always carried only her father’s name. Sometimes (if she was lucky) there was nobody at home, and she could quietly sit on the rocking chair in the corner of the living room, take her favourite book and read, nibbling on the pointer. Sometimes, her mother washed the dishes in the kitchen, and her father watched TV, so she would go to her room, lied on the bed and dreamed, with her eyes open, of a future life in which she would be happier. However, sometimes (and those sometimes were the most difficult sometimes) she knew by the yelling that she could hear on the stairs that she would again see the picture that she dreaded the most – her mother sobbing behind some door, all in tears and snotty, with her clothes torn and her hair falling over her face, while her father washed his hands in the bathroom, cursing her with his face red.

Still, once she saw her parents making love. It was early in the morning, and the strange sounds that she heard woke her from the deepest dream. Not knowing what was going on, she got up and saw them through the open door. The sight froze her so much that she could not return to bed, but she simply continued and sat on the rocking chair in the living room, took her favourite book and licking the pointer, absurdly, she tried to read. She had never felt so betrayed before, so cheated and deceived. The two people that spoiled her life on daily basis with their hate to each other, who told each other the worst words with an unbelievable easiness, the people she had never seen touch each other except by accident, made love. Then she was defeated by what she saw as a farce, and she was terribly insulted because she did not know if they hated each other by day, and pretended that they loved each other by night, or vice versa.

Many years later, at her father’s funeral, while the candle wax dripped on her finger, and the priest sang sadly asking for forgiveness for his soul, the images of his life that ran through her hands only a day ago, and the dead body that they changed, passed through her head.  She remembered the fear and anger that she had felt for him for years and she realised that at that moment, above the open hole that would forever hide his face from her life in only a minute, she had nothing else inside her but a compassion for the suffering of a man who left without learning how to be happy.

“It is empty without him.” Her mother sighed as they sat at home after the funeral around the table full with cups releasing the sweet warm smell of fresh coffee. “Yes.” She thought and for the first time she saw that the hollow-cheeked face of her mother, swollen with tears in only one of the many faces of love which she would never completely understand.

On the night after her father’s funeral, they made love. He was the first to fall asleep, and she stayed awake for couple of more moments, thinking that one they the two of them shall part too, when one of them sees the other one naked for the last time, dressing him in the best clothes. She hugged the warm body that drowsily hugged her back and fell into a calm sleep without any dreams.

Translated by the author.