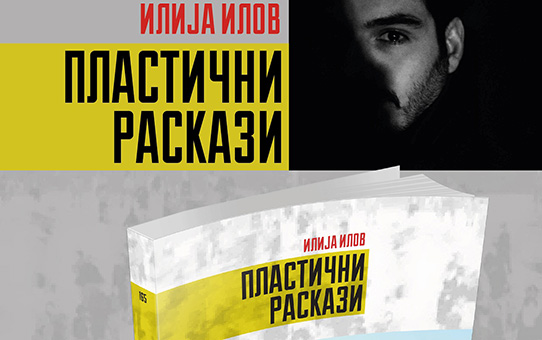 Excerpt from the book Plastic Stories by Ilija Ilov.

“Would you like to have a priest come over to confess your sins?”

“Call a psychiatrist, that’s my last wish,” he said.

Before the doctor arrived, he asked for pen and paper. There were quite a few people in the room and someone fetched both and placed them on his knees.

He took the sheet of paper with his free hand and clamped it with the shackles on his other hand. He began to write.

“Thank you.” He put the paper beneath his buttock and leaned his hand against the chair.

The doctor walked in and the man indicated where the message was.

“I’d like to be hypnotized, doctor, and forget everything about my miserable life. That’s my last wish.”

The doctor put on his glasses and began to read.

– September 1942, I pass the Greek border illegally, they capture me and put me in custody

– January 1947, I poison a postman at my mother’s house, rape and kill my mother

– August 1950, after seven years on the run, they capture me and sentence me to death on the electric chair

The psychiatrist drew his chair closer to the inmate. From the inner pocket of his suit he pulled out a silver watch. Hanging from a chain, it swung in front of the inmate’s nose.

“Follow the movement,” the psychiatrist said in a calm, assertive tone.

“Your body is a large egg, filling slowly with white dust. Your legs are the blunt end of the egg, trapped by white dust and growing heavy. The dust slowly fills the egg and mummifies your body. You lose control over your legs. Your stomach shrinks. Your breathing becomes heavy. You try to make your way out with your hands. You lose control over your arms. The dust settles on your eyelashes. Your eyelashes grow heavy. You can no longer see. You are falling asleep. You are asleep.”

The psychiatrist took up the piece of paper again and began to read in a flat tone.

“That day,” the inmate began in a different voice, “my cat. Leaves me little kitten. To take care. Kitten goes poo-poo. I go to wash it. Bell rings. I go. Dog. I come back.” He began to weep. “Kitten. Meow-meow no more. I kill. You say. No. I love you. Ohh… And big cat. Dead. Same. Bathtub.”

The doctor took notes as he spoke, then stopped. Silence enveloped them both.

“You did not kill the kitten. It died because the big cat did not take care of it. They don’t exist anymore, they were never a part of your life at all,” the psychiatrist concluded. “Now, what is your cat’s favorite food?”

“How about September 1942?” the psychiatrist went on.

“Stop. Calm down,” the psychiatrist intervened. “The dogs are a bad dream. They are gone, they don’t exist anymore. Forget this nightmare.” Then, looking at the next item on the sheet, “Do you remember what happened in 1942 and 1943?”

“Farmland. Sun. Killer. Peach on the ground. Killer, she said. I bite into her. Tear to pieces.”

Frequently glancing at the sheet of paper, the doctor scribbled his notes.

“Killer, the dead peach called you. This is reason enough to eat it. Peaches should always be obedient in the face of the man who is about to eat them. Forget about that. It’s just a peach like any other.”

The psychiatrist took a beat, then went on. “Can you recall what happened in September 1946?”

“Yes. I visit the mare. Black teeth. Killer. Punch nostrils. Metal rod go in. I give poison. He is the same…. that… Killer. Mare falls. Yikes she’s dead.”

“The mare, she died of old age. The metal rod hit you once. Forget you’ve ever seen a mare and a metal rod. How about March 1948, does that hold any significance for you?”

“Yes. I was in a hyena’s house. The little hyena. The big hyena. Him. Her. Killer. They try to bite me. I kill him. I slap her on the bum. Death. Small hyena too.”

“You’ve never seen a hyena in your life. They were just a dream you had. You need to forget all about that dream.”

A glance and a scribble of notes.

“Blue rats. They attack. Tie me to chair.”

“The rats are just a figment of a nightmare. The chair is your throne. You are the king. What happened in 1950?”

The doctor was silent for a while.

“You begin to feel the white dust unsettle from your eyelids and disperse from your body. You are alive. Open your eyes. You are free.” Then, with a smile, “Welcome back.”

“You shall address us as Your Highness!”

“A thousand apologies, Your Highness,” said the doctor, rubbing the prisoner’s hand.

“We are in a good mood today, but shall this happen again, there will be consequences. Now, kiss this hand and retire. We desire to be left alone on the throne.”

And then, addressing the rest, “And you, gentlemen, will you not respect the king’s orders?”

“I’m the warden here. You are sentenced to die.”

“O-ho-ho-ho, you dare speak to your King in such a manner? We have been far too kind with you. Guards! Guards, have this man’s head on a platter within the hour. But… what signify these chains?”

“Doc, can I have that piece of paper?” The warden put the list in front of his eyes. “Is this your handwriting?”

“There is no royal seal attached, Sir – what exactly is your title?”

“Put the cloth over his head.”

“Put what? Our people are in grave danger. How will they breathe without their King? You are evil men, it is plain to see. Think of the people, this body politic. You can have my throne and kingdom, but give us our people. My kingdom for a people!”

A policeman pulled down the lever. His muscles twitched and his head convulsed. His hands twisted unnaturally.

The smell of burnt flesh and feces filled the room.

It was a long time before the warden left the foul smelling room.