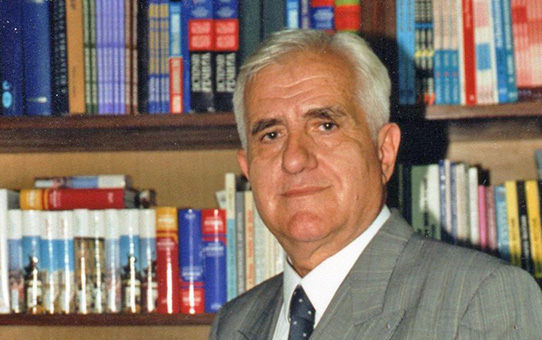 Luan Starova (1941) is a storyteller, novelist, poet, essayist, literary critic and diplomat. He has Ph.D. in Philology.

Starova is the author of the Balkan Saga. More specifically, his prose cycle Balkan Saga, as he himself points out, is his life project that encompasses his entire prose creation so far, with the aim of telling the story of the Balkans in the dramatic XX century.

The books of the Saga are being published in more than twenty countries, and, through them, the local cultural public becomes familiar with another, different Balkans, emanating from the imposed barbarity. At the promotion of a part of Starovas works in Washington, D.C., among other things, it was pointed out that the books of the Balkan Saga cycle represent a counterweight to Robert Kaplans book Balkan Ghosts, which presents Balkan hate as something unchangeable. In almost every book in this cycle the metaphor of Balkan antibarbarity is searched for and found. Therein lies possibly the authors main motive to endure in its continuance.

Not uncommonly, to foreign publishers, literary translators and critics, Starova is the author that conquers the world with a Balkan Saga.

He is a winner of several foreign honors, chief among which is the highest French recognition in arts and literature. In the Republic of Macedonia he has received the Stale Popov award in 1992 (for the novel My Fathers Books), as well as the Racin Recognition in 2008 (for the novel Searching for Ellen Leibowitz). For his Balkan Saga prose cycle he has won the highest state award St. Clement of Ohrid in 2011. His novel Balkan Scapegoat has been nominated for the international literary award Balkanika in 2003. The novel The Age of the Goats has been nominated for the Best Foreign Novel award in France, the Jean Monnet award for the best European novel, and the Angelus award for the best novel from Central and Eastern Europe.