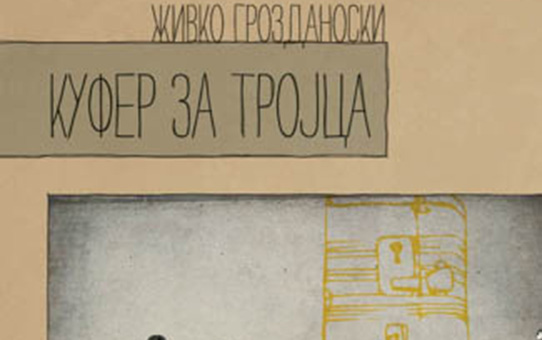 An excerpt from the novel “A Suitcase for Three” by Zivko Grozdanoski.

1. Randu vs Rambo (the very begginings)

But, this is not just an abstract theory. This is my everyday life, ever since I have known myself, I don’t feel good in crowds. It’s worse if the crowd is indoors – first I feel anxiety, then panic, and even hysteria sometimes. There has to be some medical term for this phobia, but that doesn’t matter. I never wanted to know that name. Some words and names, as we are going to see later, shouldn’t be known and heard. Besides, for now, it’s more important to know, in my thirty years of age, I have been neither on an excursion, nor on a football match, nor a concert, nor in a disco. I haven’t been, imagine, on a protest either.

Primary school was the most difficult for me. I had been going through the ordeal with thirty-three others in the same classroom. Though, I didn’t cut classes because scrabbling was a distraction for me. Besides, there were cross-words as well, and some strips now and then. Erotica, unfortunately, was among the backbenchers, and I was far from them. I had been sitting on the first bench, on the chair next to the door. Just in case.

It was a different story at home. I had been trying not to be in the same room at the same time with my grandfather,  my grandmother, my father, my mother, my brother, and my sister. This situation would become more complicated when guests would come over. So, I would disappear then. Usually on holidays; when the doorbell would ring, they would joyfully go to open, and I had a feeling that the crowd of chattery guests will come in, walk toward me, grab me for my neck for no reason and push me against the wall… For that reason, I would stay still like a statue, while guests were meticulously taking off their shoes, greeting with my folks, pinching my cheeks, entering the room, sitting on the table, drinking, starting to chatter… Out of courtesy to the guests, I would get in, as well, a smile would crook my face, and I would soon leave the room. Before going upstairs, I would throw a glance at guests’ shoes for a moment. And, of course, at the box of chocolates, they have brought.

Bringing chocolate boxes to house celebrations is a social phenomenon that consistently mirrors the culture in our wider region, therefore, they deserve special attention.

On that fatal night, I was being at uncle Sreten’s and aunt Jagoda’s, and of course, Gjore and the little Mare were at home as well. Bile, who had stopped watching the series after the second episode, in which Severdzhan was killed by a scorpion sting, wasn’t at home. However, uncle Borche came unannounced. Without loosening his grip on the glass bottle, he stretched himself out on the armchair, in the corner, next to me and Mare. He didn’t turn on to the TV at all. And there, everything had just started happening. The first scene of the last episode presented to us a picture of sunrise in magnificent India. And there – a colorful town, and across it, colorful hotels, and in one of them, – a colorful room, and inside the room – a boy and a girl.

Unversed one would say that they are broadcasting child pornography, but these little kids were spouses, partners for life, and we all knew that long since. Mare had looked at them and laughed “Mom, are the children going to play?”

The children were laughing and there was some joyful flute playing from the backdrop. But, all of a sudden, Marajadz’s face became sullen. A zurna shrilled, a drum resonated, and the terrified face of the wife appeared on the scene. As if she was feeling that this unhinged drum can mean one thing only: initiation. So, after two minutes of scanning the girl’s physiognomy, as an additional reinforcement on the backdrop about ten more drums came out, and on the next frame, there were the thin fingers of Marajadz’s wife, tightly squeezing a white sheet’s edge on the bed. Although drums had been increasing adrenaline to teeth, the film frame with crumpling sheet was so slow, that the picture on the screen was simply flickering, all we saw were about four or five frames, but however, the result was clear to all of us. Well, it wasn’t clear to all of us: Mare, with eyes wide open, was looking at the TV screen in fright. It had to be the drums that made her frightened.

Mom, where are the children?

And the children were gone. Forever. In the next frame, it was afternoon above magnificent India, and we were frozen with fear.

Only once? – Gjore have screamed and looked at the piece of paper.

No, it can’t be! – Aunt Jagoda grabbed her head.

Damn it, crazy people – uncle Borche’s drunk voice came from the corner of the room.

Fortunately, with the next frame, we were again in the room of Marajadz and his wife. They were laying next to each other. Marajadz was nonchalantly bringing the pipe to his tired lips, while his wife was standing still like being stuffed, eyes wide open, looking vaguely somewhere in front of herself.

A Suitcase for three

Simona and Bistra are friends since their childhood. They know each other since they were little girls, but after Bistra had moved to Taftalidze, they see each other less frequently. Mostly, when they hang out. Rarer Bistra comes in her old neighborhood, in Zhelezara. Most rare, they catch up in Bistra’s new apartment in Kisela Voda. After entering Bistra’s weekend home in Kisela Voda for the first time, after sitting on her toilet for the first time, and after facing dozens of black cockroaches running around the tiles surrounding her feet, in Simona’s mind, an undisputable ground has been created, which was the source of all excuses for not visiting Bistra. But when she would do that, she always came up with some solutions for cockroaches; she would first use a spray, then place some chalk, and then some sort of powder or another. Nothing would help. The reason for that was Bistra’s neighbor downstairs, who was a disinterested jackass. He would not only report her to the police, but he didn’t care of cockroaches teeming in his apartment, crawling up, as well. Cockroaches would send chills down Simona’s spine, but the reason for that wasn’t the disgusting way they were moving on the floor tiles in the toilet in Bistra’s apartment. The reason was way more complex. Until recently, Simona believed that she was living in perfect harmony with the surrounding nature. She used to believe there was one Spirit only, and many bodies, so love should be circulating through life in all various forms, that should be wisely respected and assisted. She enjoyed reading about rituals that have been used by people to apologize to the Earth, whenever they take something from it, whether it is a hunted game or a broken twig, she would never kill the spiders inhabiting the corners of her room, as well as wasps that used to fly into her room.  Sometimes, killing a fly, which was an extremely rare case, would make her feel sincere anguish.

My folks aren’t here. They are somewhere at work, as well. Great!

Simona is silent. Bistra gives me a confused look.

Zhil, what’s up with you?

Now both Simona and Bistra look at me fearfully.

Come along. Let’s take a drink.

They both get up. I enter the hallway. They enter after me. They don’t say anything.

I walk to the end of the hallway, then turn right. I open the old wooden door. I’m going downstairs. The girls are following me.

It’s cold in the basement.

I turn the light on. I look around.

Everything is in its place.  As long as I have known myself, nothing has changed.