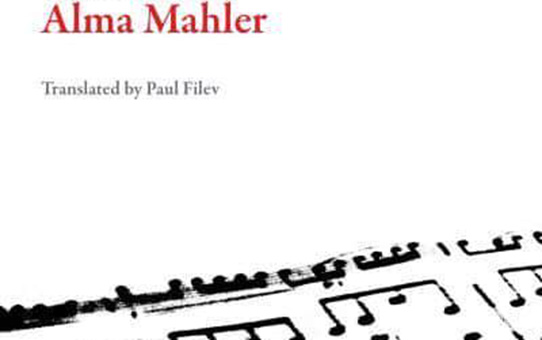 An excerpt from the novel Alma Mahler by Sasho Dimoski.

You can have any name you wish, Gustav. You might even be called a fabrication. I sometimes used to think that you were a figment of my imagination, a product of my deep fantasy. It seemed to me as if your talent were merely an imaginary form of what I myself wished to possess and never had. That it was the reason for love. How stupid you are, Alma! Stu-pid! You needn’t be just a shadow. You can be an eminently proud shadow. Pride and stupidity. Stupidity and pride. A simple list of priorities. I am suffering the pain of a seemingly unending loquacity. My head is pounding. Sometimes I have nothing to say, yet my head still pounds. You ought to remain silent, Alma! You must! Stupid and silent Alma Mahler. There should be a sign on my back that reads: Stupid and silent Alma Mahler, unable to die for the sake of herself, instead she died a little for others.

Alma would not permit herself that small death that was hers only. She would not allow herself that freedom. That’s why she ended up the way she is: an unhappy consequence of time that never ceases to run, time that long ago stopped being her ally. Alma Mahler who gave up!

I gave up, Gustav. I gave up long ago. Now I simply exist from day to day. I haven’t felt alive in a very long time. Nothing pleases me or saddens me. Nothing or no one can make me happy. As time passes, people go by with it. Nothing remains after people, Gustav. All that remains are just other people. People who spend their days remembering others, kept alive merely by staring at the photographs of smiling faces taken in happier times. I am one of those people. Today I think the reason for my

continued existence is precisely because of my memories.

No, Gustav. The reason that I am alive today is for the sake of others. For all of my people. For you, Gustav.

Someone is laughing. Perhaps it’s me who is laughing. Perhaps I hear myself. Oh, if only I could hear myself laugh again! At one time, I used to know how to laugh. While you shut yourself up in your little boathouse by the lake, I would laugh and run all around. I felt as if the whole of Austria was at my feet. No, as if the whole world were at my feet! In fact, I couldn’t have cared less about who was ruling the world because all things began and ended with your music. You had begun to be heard. To resound. I could hear you. I became Alma Mahler with a capital “M” and a small “a.”

Some people are destined to live for others. As if they have been given a mission. Sacrificing their own interests by constantly putting others before themselves. I always knew that it would be like that, Gustav. I was here so that you could be someone important. Someone significant, Gustav. Without making demands, without asking for anything. Simply to be here. So that nature could be near you and within you. There are some things I have never understood. Most probably because they’re not meant to be understood. I only made sense of them as ready facts. Not everything is knowable. If everything were knowable, fascination and enchantment would cease to exist and we would become rather ordinary.

I could be quite ordinary. Perfectly ordinary. Just plain Alma. The wife of a butcher. Working in her husband’s shop, slaughtering pigs. Drenched in blood my whole life. There would be no difference. The blood of your work is on my hands. Your rage, your emotional weakness, your curses, accursed notes. It would be better if the music were to remain inside the composer’s head. In your case there would be far less suffering. But the world would be nothing without art. And I would not be Alma Mahler.

I remember when I saw you for the first time. I fell in love with your funny nose and your glasses—

through the lenses, I saw my own face in your eyes and recognized something. I’m not sure exactly what

it was that I recognized. I have always loathed explanations. I knew that it was you. That which you were meant to be in order for me to be yours. Yours . . . Yours? I was never yours! There wasn’t anything that was just mine. Even my lovers belonged to you. All of my days were yours. And still are. I cannot escape that. With the passing of the years I succeeded in making something useful out of all that, or at least I convinced myself that I had. What happened to us? Did my judgement lead me astray? Did I end up being mistaken, Gustav? Mistaken, stupid, former Alma Mahler? A different me, someone who never liked herself?

Nothing can be the same when a person ends up alone. I was alone. And I am alone. After us, it fell to me to bear the burden of your loneliness and your solitude. I met many people, none of whom could fill my emptiness, the gaping hole in my heart. And that is why I gathered up your scores in my arms. I gathered them up and danced with them. I danced to all your music. With you, with the scores, with their notes. I danced with my forlorn and lonely time. I didn’t want anyone to see me. I didn’t want to see anyone. But I had to, Gustav! I had to go on after us. To live, and go on with life. After us, the biggest burden fell to me. And all of that baggage, this baggage, some other baggage, mine or someone else’s. And all the truths within them. Truths that would emerge after us. After you. Truths that weighed on me and at the same time affirmed that, one day, one will have to bear one’s burden alone. Entirely alone. Without anyone’s help. The one mission remaining would be—to recollect that there had once been someone with whom one had shared the burdens. The knowledge that I had you, even when I thought that everything was lost. Today, I know what is lost: my opportunity to have done something worthwhile with my life. Still there are many good things that we have left behind. A great deal of lasting values, Gustav.

I remember when you began to write “Titan.” Symphony No. 1. You put yourself into the form of the person you wanted to be. Foresight or madness? I thought it was madness. You knew that it was foresight. Especially with regard to the arrangement, with its weight. Taking place was a kind of revolution that I couldn’t understand. You explained it to me. I thought I was stupid. That I was totally stupid. After that I thought that you were mad, and that all of that could only exist in your head. Alma Mahler was for the first time approaching the stars. I felt like Adam in that fresco who, despite all his efforts, cannot touch God’s finger.

It was then that you said to me:

– Beethoven wrote the greatest number of symphonies. Nine. I will write more. And you and I will love one another, Alma. Forever.

Love each other forever? Do you know where that “forever” is today, Gustav? Do you know where my forever has gone? It has withdrawn somewhere far away and I can no longer see it. My eyes have grown old with age. They are clouded. You might even say unseeing. I no longer see things the way I used to. But, however far away they are, however ruined my sight may be, I can still discern their presence. In my forever there is an old woman who desperately waits. An old woman who time has forgotten, who sits on this chair, in this completely inconsequential apartment, in one of the world’s countless cities. The old woman that I have become, and who gets frightened. Who is terribly afraid that she has no one to squeeze her hand. That’s where my forever is, Gustav. In the clasp of this old and spotted hand which is empty.

I was threatened by your transformation. I was scared of what would become of me after you had changed. Changes were taking place daily. There was no end to them. In fact, I don’t remember how they even began. You were staring at your reflection in the quiet stillness of the lake, and discovered there a kind of music. You said to me:

I was unsure what it was I was meant to hear. It was silence. Total silence, occasionally broken by my rapid breathing.

If only you knew how much I cried, Gustav. I ran off from your little boathouse and sobbed. I saw you taking a swim in the lake. That’s when I returned. You lifted me in your arms, all wet, and said to me:

Then you smiled. You smiled at me with all of your music. Contained in that smile was the spark of life passed to man. To my man. To whom I gave the best part of myself.

At that time you still knew how to smile, at least with your eyes. That’s how I smiled at you also. I smiled with my whole being, simply because all of the things in my life grew better and more important alongside you. They prospered within us. We were a kind of soil in which every seed bore a lavish crop. We fed off each other. We were happy, weren’t we, Gustav? When one experiences a sense of mediocrity, is it then that others begin to make an appearance in one’s life? I don’t know. What I do know is that sometimes we would look away and swallow our tears. We swallowed our tears and opened our arms as a way for us to warm our hearts, at least for a moment. It was a different kind of heat. One that seared us, instead of warming us. We wounded one another. We violated our love and it beat a hasty retreat. But it didn’t escape entirely. It came back. We succeeded in our fight for it not to forget us. That’s why I’m here today. That’s why this railway platform is here.

Life never throws us burdens greater than we are able to bear. And we bore them: joys, sorrows, ordeals. We gazed at the sky and saw our burdens within it. The sky-distant and blue, our burdens— always new and different. The sky grey, our burdens scattered all around. We looked at one another and knew that we had strength. Strength, Gustav. That’s what keeps me alive. The strength that time has given me, and because of which there is no burden I cannot bear to the end of the road. This path, this train and this platform today are sapping all my strength. At the same time they are making me stronger. When one’s strength is gone one realizes the importance of perseverance. It’s quite necessary, Gustav. One must stand firm if one is to remain true to oneself to the end. To the end of it all, to the final breath. That’s why I smile. And laugh. Because I know that my end has occurred on this road a long time ago and that I will remain behind in every place. I will remain inside us, Gustav.