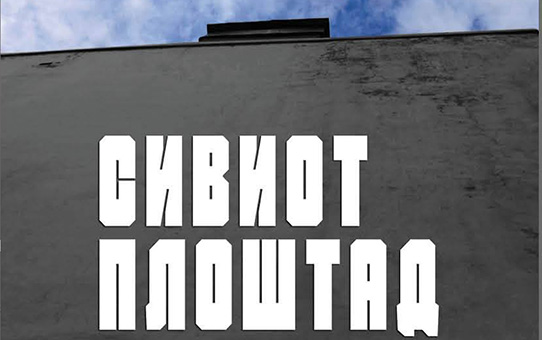 Excerpt from the novel “The Gray Square” by Sašo Ognenovski.

That evening, right next to the Tunnel “Grich” on Mesnichka street, some construction workers had been walking around. They were finishing with their work for that day. They have been restoring the old mane-like house that should be greeting its new owners the next day. This March didn’t bring hopes in Zagreb that a sunny spring would smile upon them. A gloomy morning with heavy, thickened clouds and drops of drizzle here and there. The Reverent Franjo Medjimorec, a priest in his seventies, was sitting at the egg-like old-fashioned in a pretty unpleasant mood, while Domagoj Pirić was standing on the window without a curtain, looking outside, absorbed in thought.

“Would you finally tell me the reason for our meeting? It’s been about thirty years since we haven’t seen each other. Many times you would pass by me on the street, and your family would run away from me as if I was a devil.”

“That’s why I called you, Mr. Franjo. Because you are a devil.” Domagoj looked down, realizing that reconstruction workers had already gone and there was nobody outside. It was a peaceful district, although situated in downtown Zagreb, right next to the park.

“What?”- the priest, taking a sip, choked on his coffee, which had already cooled down, while waiting for his friend to start speaking. “Everything that had been happening with you and all that charade with the poisoned children wasn’t my problem.  Do I still have to explain to you? The court had already said its word, and it was long time ago. You are wasting my time, sir…” The priest Medjimorec got up defiantly, but Domagoj held him with his piercing bass, without turning yet.

“Sit down!” Medjimorec sat down fearfully, took another sip, and shortly after, he sighed, holding his chest. “Your heart is stronger than mine, though I’m 42, and you are 73 year old. So, there isn’t room for pretending. I wanted to make a deal about one thing. It has been fifteen years since I’m a doctor, and I can’t trace that poison back. Conventional medicine cannot figure out the ingredients, and I think that’s what saved you. Muslim children couldn’t be eradicated just like that. Regardless of the almighty communist regime and the variety of exterminating methods, it was the only way for Muslims to be removed. Isn’t that so? Or not?” This time the priest looked straight at him, but said nothing. ”I’m not righteous, and I think you were right, and the fact that I’m running a humanitarian career like a loveable surgeon, only I know how I succeed to maintain it. You know very well, the faith in God won’t give neither money, nor bread. Death is the only golden mine. I think we understand each other!”

“I knew you were scoundrel! I did nothing to be blamed for!”

Your head is not worth a penny now! What I need to get is your valued formula, the formula that the red comrades had paid you for with a nice estate in which you sometimes caress high school boys, about whom they also know, everyone knows, and these Democrats don’t care much about it either. And among them, there are servants of dark forces. So?…

“I’m wondering how dare you…!”

“Don’t be wondering, ‘reverent’. If I could have done that, I wouldn’t be wasting my time now with the man I don’t even want to cross paths.” Domagoj was already sitting at a very indecent distance from the priest, so he had to get up and go to the window.

“All right. I don’t have the formula with me. We’ll have to meet up again. It is a piece of paper I must look for. However, many years have passed since.” In the meantime, Domagoj went up to him and stuck on him. He drew a piece of paper and a pen out of his pocket, sticking them on the wall next to the window.

“You prefer this posture, and it makes you pretty excited. Not me, trust me. It makes me sick, but I have to remind you that your naive tricks make me laugh. Write down!” Franjo, speechless, was trying to pull away from the grip of this pretty broad-chested and muscle-bound man, and with his hand shaking, he started to write down on the piece of paper. Doctor Domagoj was wondering as he was reading. After the priest finished writing the fatal formula, which was actually about ten lines long, he wanted to get rid of the doctor’s unpleasant grip. “Are you sure these are the real ingredients?” The priest replied to him clinically. “Just try, and you’ll see! You’ll see for yourself!” Domagoj angrily turned his face towards him, but, however, he was pressing him with his body against the wall. “Behave, reverent!” I’m asking you because in case you have intentionally written it wrong, you won’t have time to correct it.” Franjo fearfully swallowed his saliva. “Let me go! I gave you everything you wanted! You won’t see me anymore. Do whatever you want with that!” Domagoj started laughing grunty, before getting a firm hold on his neck. “Are you sure that this is the right formula?” Franjo started gurgling helplessly. “Yesss… Yessss…” They were looking at each other like that for a few minutes, and Domagoj released his grip. “You are a strong man, you can go long without air!” The priest sighed and pushed the doctor away. He wiped out his sweat with the white napkin and proceeded to go around him and leave. Domagoj grabbed him by his hand. He froze out. “I’m sure this will stay between us. And you?” Franjo was nodding convulsively, trying to have him release the grip. “I’m sure about that! You know why?” Franjo turned to him.