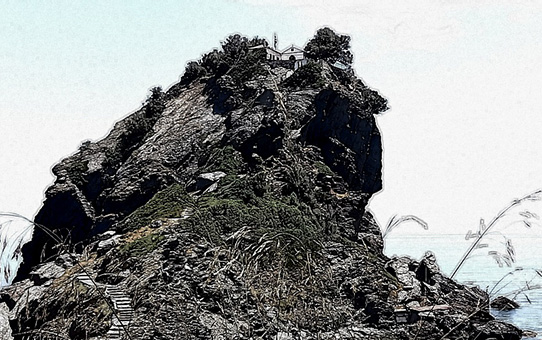 A short story by Tome Arsovski, posthumously published in the collection of short stories “Faces from the Paradoxical Scrapbook” (Magor, 2012). It won the contest for a short story of “Nova Makedonija” daily in 1960 (in addition, it was that year when the contest for this prestige award had been announced for the first time).

There is always a reason to live! – the teacher exclaimed, using the fork to prick the lower part of the drumstick. – For example, look at me. I’m old and ugly, the whole village laughs at my ugliness, so to say, and even still, I have a reason to live. He had gaped and using his fingers held the bone that got peeled off astonishingly fast. – I will first write that story about Narcissus, and thereafter I would be free to die.

The village priest, who hasn’t really understood why would the already half-blind teacher mention again the case of Narcissus, given that his story was a blatant lie, wasn’t paying him attention, looking at the dish and picking at the grapes.

I have also read countless books, and if you want, I will show you! As if the teacher somewhat rose from the tripod.

It’s not that I’m defensive: I admit I’m what I’m, and I’m not ashamed of that. But literature isn’t in the written lines! Wisdom is between the lines!

The priest and the village headman, as if on command, scratched behind their ears.

Nothing remains after a person’s death but things we could say about them, – the teacher was explaining. – And those we will have nothing to say about, would be fairly forgotten! That is old wisdom! Here, there are things to be said about Narcissus, and we have already forgotten him. Why?… Ugly people are rare. And that is a shame.

The priest and the village headman, as if on command, scratched behind their ears again.

I have proof that the legend of Narcissus is a women’s lie! Narcissus did exist indeed, that’s true, but he had been the ugliest person in the world!

The old teacher was speaking louder than some stranger would have thought necessary. Already ardent enough, to the priest’s big surprise, he told for the first time the original story about the ugly fellow Narcissus. The old one he has heard maybe 200 times from the teacher only, that Narcissus had been so beautiful that he had fallen in love with himself and while looking at his own reflection on the water, fell and drowned, and on that place sprouted the white tall flower Narcissus (by the way, it isn’t called Narcissus, but rather daffodil, it grows in the swamps below the village, every villager knows it!) – everybody is familiar with this story, but few believe that. Because, if he had been beautiful – that would be OK, if he had drowned – that would be OK, but a flower sprouting from a person who had drowned, God himself, – forgive me, God, may your name be honored, – wouldn’t believe that. Many people drowned, and neither nettle nor cotton thistle grows, not to mention some Narcissus!

But this was something new. Narcissus had been ugly! Not simply ugly, but the ugliest person in the world!? Well, teacher, in my sermons I have condemned the people who mocked you in the face of God, but what you’re saying now isn’t right. Hm-hm!

I have irrefutable evidence!- the teacher shouted. -Here, – he left the fork on the table, it produced a ringing sound before sliding into the deep porcelain bowl. – The whole legend is based on a lie. Only the name is correct – Narcissus. But Narcissus wasn’t his parent’s only child, rather seventh of twelve children of the old, poor shepherd. And there isn’t anything legendary: here, the village headman has two sons, are they the same? No hard feelings, village headman, but the younger one is somewhat prettier. Isn’t that so, father? There are ten fingers, and they are not the same either. Isn’t that so, father? The same applies to those children: the smart one, the crazy one, the pretty one, not so pretty one, and Narcissus – ugly, ugly, and somewhat nuts. His father and mother, poor souls, must had been ashamed of him! So, what did they do? Stupid children aren’t supposed to stay at home, so they sent him to school, as Genadija the ranger did to his son Kosta. And schools back then, it’s well known: one teacher only, and pupils would go over to his home to learn that the world had been created of four elements: water, earth, air, and fire. Isn’t that so, father?

– They call us materialists, father…

You are saying materialists, and I’m telling you it’s from evil! It’s well known who had created the world. The priest crossed himself. – But you keep saying what you have to, so hm-hm…

Oh, – the teacher had put up with that and proceeded, – Narcissus walked around for a year or two, and then he came back. He is not doing well at school. Nothing would get instilled in his head. Was he thinking of the ugliness, did he feel sorry for not taking seriously anything, anyways, the boy didn’t study and the teacher sent him home. Even more shameful things had come out. The brothers and sisters got crazy… “Go away, ugly, one may think you were our brother!” “Even a stone has more brains than you!…” And “Boo, you lop-eared!”, and “ears like fans”, and “melon, not nose”, here and there ha, ha, ha, hee-hee, hee-hee, and Narcissus ended up alone. Without friends, without brothers, without family, without pals. Only his mother, the poor soul, relented, and gave him dozen of sheep, sending him to herd them out of the village, far, far away, there where nobody has been before. She bought him a flute, a shepherd’s one, to accompany him in the loneliness.

The teacher sighed. The priest and the village headman looked at each other, scratching behind their ears again.

A drop breaks up a stone, and a word kills a person – the teacher proceeded in a trembling voice. One day Narcissus was playing and stopped playing. He let the sheep go in the nearby forest, and he got stuck in some watercress, in some bulrush by the lake, turned around one more time to make sure nobody was watching him, and looked in the water. And there? A pure ugliness!… He had gotten sad and started crying. There had been two or three female shepherds that ill-treated him the most. They would follow him starting from the village, and after noticing he was nowhere to be seen, and his flute went silent, they hurried to see if he has drowned. One of them spotted him looking at his reflection in the water, crying. She had furtively snuck up to him and stood over his head:

Woo-hoo! You beautiful! – right in the ear.

The lass exclaimed as a spring bird. Narcissus got scared, slipped off, and fell into the lake. The mischievous lass’ giggling resounds around. What she didn’t know was that Narcissus, being terrified, had slipped off and drowned.

– He didn’t know how to swim, right? – the priest asked curiously.

He didn’t. – The teacher used the silence to fill his glass; his own first, then the two other glasses. They found him a day or two later, – he proceeded, after sipping from his glass of wine, – and they buried him by their customs and laws. And all the villagers went home. But, speak no ill of the dead. That’s when someone cleared their throat.

Yes, yes, – sighed another one – he didn’t bother anyone.

He was a quiet kid, he knew nature haven’t gifted him with beauty, so he came to terms with that…

Imagine, ha, ha, on second thought… the boy wasn’t that ugly, right? A big head on a big torso, it’s even natural!…

And so… By word of mouth, from one generation to another, the legend had reached the Ancient Greeks. And they had forgotten what Narcissus was like. The old woman praised his eyes, someone else his ears, nose, hands, and legs, as well as the tail, and Narcissus became beautiful! He even fell in love with himself! He even, being so vain, slipped off and drowned, ha! And here is Narcissus – old wives’ tales. It’s not that I’m ugly myself, so I’m accusing them of mocking me out of their wickedness. Keep up mocking! But I have data, I have literature, I have scientific prooves for that! Narcissus is a child of gossip.

– That’s screwed up, – the village headman scratched his ear from behind. – So, you’re saying, you will write it?

A dissertation too, if necessary! – the teacher raised his index finger with intimidation. – Only, I’m not finished yet. There has been one thing I haven’t figured out yet: did that lass love Narcissus or not? – He poured himself some wine again. – That’s the only thing left, and thereafter I would have my work done. I have told you this in a nutshell only, I will write it in Greek anyways.

What? You think I don’t know. Only not in the Greek alphabet, but in Greek, in the way they use it. The old-fashioned one. I have read six plays, which are antic tragedies, as they use to say scientifically. They don’t say that as we do. Here, for example, I would say: “Folks, he hit me first, but I didn’t hit him back, because I was afraid of his strength”. The old-fashioned way is the shorter one, you would say, “Oh, brother, the whipcord of fear got my hands tied up!…” Do you get it? And they would not say, “Due to the wickedness and jealousy I couldn’t see the truth”, but “The snake of jealousy got my eyes blindfolded”. – I will write it, and then you will see.

That’s when the old village teacher had stood up, with his hand moving back the tripod from beneath, before saying goodbye. I will write it, he thought, let the whole world see!…