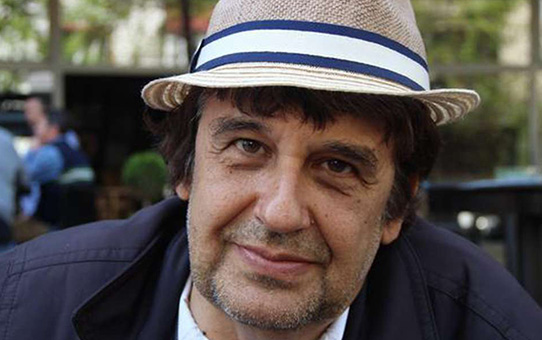 Aleksandar Prokopiev (1953) is a storyteller, novelist, essayist, poet and literary critic. He has Ph.D. in Philology and is one of the founders of post modernism in contemporary Macedonian literature and culture. His works have been translated into fifteen languages.

Students of Macedonian literature in the last two decades count him among the authors whose work offers that Borges-esque dangerous satisfaction from reading, to the magic of which both the writer and the reader are equally subjected.

Prokopievs narrative discourse is characterized with permanent self-referentiality, a stare in oneself and following of one’s own traces: all that he has written so far is mutually connected and intertwined; everything new is in harmony with something previous or something future (representing a blueprint of some future work). As a classic of Macedonian postmodern literature or an avant la letter postmodernist, Prokopiev has, ever since his literary beginnings, been a passionate conspirator of the poetics of multimediality, the stylistic dominant to which he is a disciple to this very day. The numerous explicit or implicit literary references, allusions and analogies, as well as the frequent intermedial relations and overtures to music, painting, film and photography, share the same space in this authors literary world. He is the winner of the international literary award Balkanika in 2010 (for the short stories collection Homunculus).

He is represented in a number of Macedonian and international anthologies of the modern short story and is translated into: English, Russian, Japanese, French, Czech, German, Hungarian, Polish, Italian, Serbian and Bulgarian.