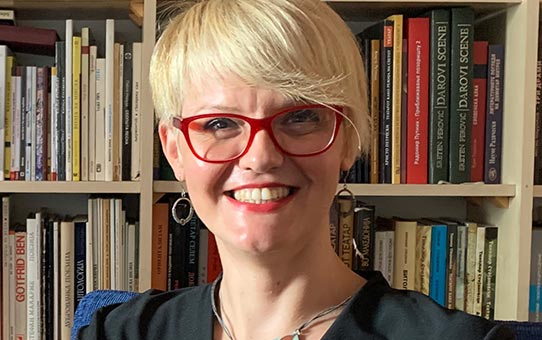 Ana Stojanoska (1977, Prilep) is theatrologist, writer, and full professor at the Faculty of Dramatic Arts (FDA) in Skopje (teaches a group of subjects at all three degrees related to the theory and history of Macedonian and World drama and theater). Head of the doctoral studies program at the same institution.

She graduated General and Comparative Literature at the Faculty of Philology “Blaze Koneski” in Skopje (2001). She completed her postgraduate studies in Theatrology at the FDA, where she received her master’s degree (2003) and her doctorate (2007). She worked as a researcher and coordinator at the Institute of Theatrology at the FDA (2001 – 2011). Actively engaged in research and study of drama and theater. She specialized in theatrical museology.

Author of: We (novel, 2021, selected in the first three of the competition for unpublished novel Pegasus): Swan (novel, 2021, Polica); Trogledalo (theatre play, 2020, published in the selection of EURODRAM: New Macedonian drama); Signature: Trepetlika (poetry collection, Tri and “Antevo Pero”, 2020, she received the Antevo Pero Award for 2020) Me and Lynn, after (novel, Blesok, 2016; she received the Racin Award, 2017 and was a finalist for Novel of the Year Award; Second Edition, Kultura, 2019), Dialogues in the Single (Culture, 2019), Theater – Challenge: Studies and Essays (UKIM, 2018), DimitarKjostarov – The Realistic Poetics and Aesthetics of a Director (Monograph, FDA, 2014 ) and Macedonian Postmodern Theater (monograph, FDA, 2006). Editor of: Plays by DejanDukovski (Proarts, 2002) and Contemporary Macedonian Drama (Mycenae, 2008). Her monodrama Glass Lamp was first produced by Theatra – Skopje, 2013. Author of hundred studies and essays published in Macedonian and foreign periodicals, as well as co-author of several theatrical monographs. She, also, writes theatre reviews.  In 2019 she became a member of the Writers’ Association of Macedonia. She is a member of several associations and organizations focused on research in literature and theater.