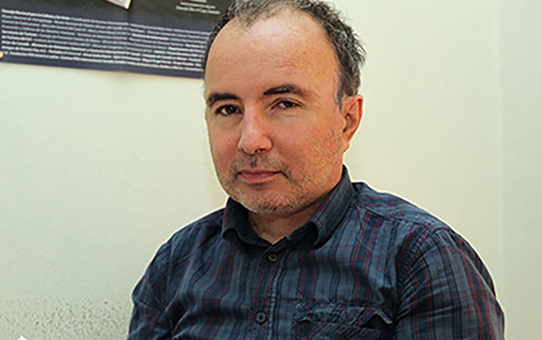 Ermis Lafazanovski (1961) is a novelist, storyteller, essayist, translator, theorist and historian of literature. He also writes studies in the field of cultural anthropology and folkloristics. He has Ph.D. in Philosophy and translated into six foreign languages.

He is one of the most inventive and innovative Macedonian prose writers in the past decade, both in terms of themes and poetics and an author who is a master of tragicomical situations and dramatic tension in a novel or short story. He is a prose writer who likes to use, but is also very capable of using parody and irony, at the same time offering a story where it is precisely parody and irony that enable the novel to be read on several interpretative levels.

In his works, the grotesque creates entire artistic structures where it is a dominant factor, thus suppressing the fantastic element to the background.

Lafazanovski is a prose writer who is capable of writing a work that superbly communicates with the reader who dwells far from the authors living and working environment as well. Particular affirmations for it are the six translations so far of his novel Hrapeshko (2006) and the excellent reception they have had with the readership.

He is the winner of the Stale Popov award for 2001 (for the novel Describer).