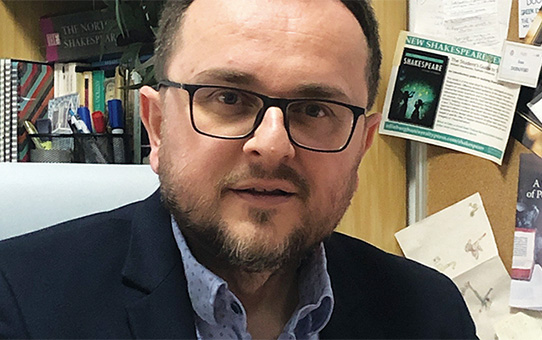 Ivan Dodovski was born in Bitola, Macedonia, in 1974. He is a poet, fiction writer, theatre critic, translator, literary scholar and professor of critical theory and literature at University American College Skopje. He studied general and comparative literature with American studies, and he got his MA degree in Macedonian literature and narratology from Sts. Cyril and Methodius University in Skopje. He holds a PhD degree from the University of Nottingham, UK. His research interests include identity politics, Balkan imagology, and contemporary drama. He has published the studies Narrative Strategies in the Psychological Novel (2004) and Small Folio for Theatre (2018), and he has co-edited ten volumes dealing with European integration, politics, and culture, including Multiculturalism in Macedonia: An Emerging Model (2005), Europe and the Balkans (2018), and the most recent ones published by Palgrave Macmillan: Realising Linguistic, Educational and Cultural Rights Through Non-Territorial Autonomy (2023) and Macedonian’s Long Transition: From Independence to the Prespa Agreement and Beyond (2023). He has authored four poetry books: Sedenka so likot/Party with the Image (1991), Luda luna/Mad Moon (1995), Sveta ludost/Holy Madness (1999), and Trevoga/Alarm (2020), and a collection of short stories Golemiot kufer/The Giant Suitcase (2005, translated into German in 2008). His poetry and short stories have been translated into several languages, and included in various anthologies of Macedonian literature. He has received the first prize for poetry at the International festival of young writers Pontes in 1999, in Krk, Croatia. He has been a member of the Macedonian Writers Association since 2002, and chair of the Macedonian committee of Eurodram – The European Network for Drama in Translation since 2017.