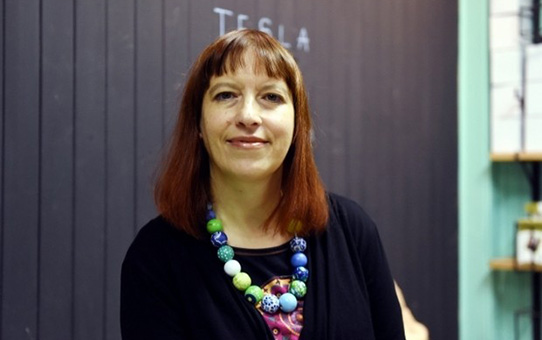 Lidija Dimkovska (1971) is a novelist, poet, and translator. She has Ph.D in Philology and is translated into eight languages. She is an award-winning author of highly acclaimed literary recognitions in her own country as well as international awards, including the European Union Award for Literature.

She is the strongest creative voice of the generation of Macedonian writers born in the 1970s. She is also one of the leading names in modern Macedonian literature and one of the most distinguished Macedonian prose writers of our time. Dimkovska is the first Macedonian author who takes on cultural transition as a theme in their prose, as well as the theme of The Other in a modern context. She is an author who, with a distinctive approach towards reality, is capable of intertwining the individual and collective memory in a story, and connects them with psychological analysis. The publishing of her first and second novel was an important landmark in modern Macedonian literature as these are novels that introduced new topics to modern Macedonian prose, as well as promoting new and unique poetic solutions.

It is a rarity to be equally successful in poetry and prose. That rarity, however, is a rule with Lidija Dimkovska. Both her novels are winners of the Stale Popov award. In 2013 she also won the European Union Award for Literature (for the novel A Spare Life).

Collections of her poetic works have also been published in the USA, Romania, and Austria. She is the winner of several significant international poetry awards, such as: the European poetry award Hubert Burda (OfFenburg, Germany, 2009), the Poesis award (international poetry festival Poesis, Satu Mare, Romania, 2002) for the best poetry book by a foreign author between the two editions of the festival, and the Tudor Arghezi award, Targu Jiu (Romania, 2012). In 2012 she was short-listed for the German prize Briicke Berlin for her poetry collection in German Anstandiges Madchemmd for the American Ihe Best Translated Book Award for her poetry collection in English pH Neutral History.

Dimkovska is also highly rated as a literary translator. In 2001, the Balkanika foundation granted her the namesake award for best young translator from the Balkan languages.

She currently resides in Ljubljana, Slovenia, working as a freelance writer and translator from Romanian and Slovenian into Macedonian.