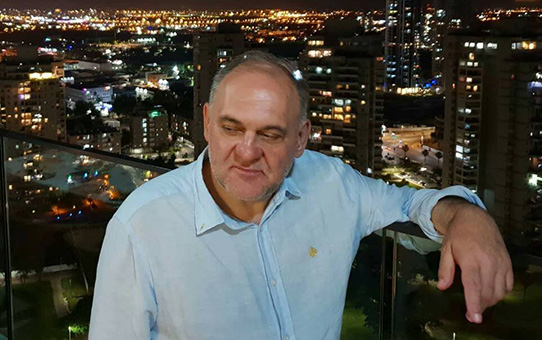 Tomislav Osmanli (1956) a play and screenplay writer, a media theoretic, prose writer, film and theatre critic and essayist. Lives and works in Skopje, Macedonia. He is an author of twenty-three diverse themed books.

Osmanli has written the first books in his country, dedicated both, to the theory of the Seventh (The Film and the Politics, 1981) and of the Ninth Arts (Comics – a Scripture of Human Image, 1987). His other books include: Skopje Diptych (screenplays, 1990), The Missing Media (essays on the civil urbanity, 1992), The Butterfly of the Childhood, (short nostalgic stories, 1993), Listening in a Deaf Time (political essays, 1994), Two in Eden (both a comic and a theatre play, 1995), The New King (children play, 1998), The Stars over Skopje (two theatre plays, 2000 – included with 14 other Balkan countries’ books, in the Literal Yearbook of Encyclopaedia Britannica), Violet Lights and Shadows (short melancholic stories, 2001), Trip to Paramaribo (play published both in Macedonian and English, 2003), Playing through the Genres (chosen plays, 2004), Stories out of Skopje (short stories, 2005), Apocalyptic Comedy (theatre play, 2005), Characters of the Meantime (three feature screenplays), Lantern for the Festival of Light (“Jewish holocaust stories and novellas, 2009), Capriccios (book of short stories and selected modernist illustrations, 2009), The Twenty First (novel, 2009), Civic Space (a study, 2011), Around the Corner (novel, 2012), The Ship. A Consarchy (novel, 2016), followed by two 2018 short stories books: An Ocean of Images, The Secret Brotherhood of the Nostalgics.

His first novel The Twenty-first (2009), won the Best Macedonian Novel prize in 2010, and was, the same year, separately selected a national representative for the Balkanika Prize contest.

The next novel Around the Corner published in December 2012, because of his complex structure consisted of nine parallel stories was highly recognized by the national literary critic as one of the best prose books written in the Macedonian literature. Each of the stories takes place in contemporary Istanbul, Novi Sad, on Kosovo, in the military base in Aviano, in Pittsburgh in the USA, in Moscow, in Geneve, but as well in ancient Sidon, on the Aegean isle of Samos, in the south Italian ancient cities of Croton and Metapontum, in the real and in the inner world of some odd trans-historically moved ancient souls…

Osmanlis third novel The Ship. A Consarchy is a dystopia taking place in different places of Europe in the year 2039.

His short stories have been published in few short story anthologies: Skopje Stories (1996) and A Day in Skopje (1998), Caesarean Cut (2000), Maketa (2001, Belgrade), The Macedonian Literature of the XI Century (2004, Sofia), etc. His plays and literary works have been published in English, Polish, Croatian, Slovenian, Serbian, French, Ladino, Bulgarian, Montenegrin, Romanian and Greek languages.

Osmanlis theatre work includes: the satirical comedy Salon Booms (staged 1986), the two multimedia plays Memento for a City (staged 1993) and Mischief Shadows (1994), the chamber play Two in Eden (staged 1995, 1997 and 1998), the play Lightning-bugs in the Night (staged 1997, 1999 and 2001), the childrens play on the Nativity and the first Macedonian Biblical theme play The New King (staged 2000), the war farce Apocalyptic Comedy (written 1999), the play Techno Star (staged 2000), the play Caves (staged: 2003) and the mono-play Cloudy Confession (staged 2008). On the very brick of the new century, after the war in Macedonia and the September 11th attacks on the WTC in New York and Washington he wrote the play Trip to Paramaribo (staged 2001). A Railroad to the Icy Spring is a stage project tribute for the holocaust day of the Macedonian Jewry (staged March, 2010), the tragic historic play Golden pendulums (2018).

Osmanli wrote the screenplay of the feature film Angels of the Dumps (1995) – a farce taking place in the East-European post communist environment, selected and presented in the international festivals in Pula, Croatia; Belgrade, Serbia; Cairo, Egypt; San Diego, the USA; Podgorica, Montenegro; also presented as a special program by the American Film Institute in the National Film Theatre in the Kennedy Centre in Washington, D.C. He has written other, regularly contest winning, feature screenplays: Man without Address (1976); The Stars of ’42 (1984); Skopje Reveries (1987); Snake flies in the Skies (1999); short meter films and TV documentaries.

His holocaust story The Photograph of Aunt Rachel won the First prize on the 1999 national contest of the Macedonian Academy of Arts and Sciences. It had been translated into English, Ladino, Serbian and Polish and published in the no.l2/year 2000 of the literary periodical Krasnogruda, Poland and in an excerpt in the respectable New York weekly, the Forward (2004), in four different Serbian literary periodicals and two times, once in English language and for the second time in Ladino, in the international Sephardic periodical Los Muestros appearing in Brussels. The same periodical published, issue by issue, all of his nine stories and novellas during these last two and a half years.