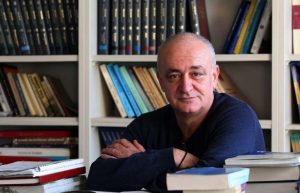 Venko Andonovski (1964) is a storyteller, novelist, playwright, and literary critic, theorist and columnist. He has a Ph.D in Philology and he is a university professor. He is one of the bestselling Macedonian authors of all time, winner of the most prestigious prose awards in the Republic of Macedonia and translated into several foreign languages.

Andonovski is the most illustrious representative of the Macedonian postmodern novel. His novel The Navel of the World has won the international award Balkanika in 2000, becoming the first Mace­donian winner of the award. For the rThe Navel of the World he was also awarded the Russian award Yugra for best novel from a Slavic language translated into Russian, in 2013. This novel, together with his most recent novel The Wilch, has been the bestselling novel in Macedonia in the last two decades. The Navel of the World has been sold more than 13.000 copies in Macedonia, making it the bestseller (up until now, a bestseller in Macedonia was a book sold in maximum 1000-2000 copies), and The Wilch has been sold in 8000 copies so far. With his novel Alphabet for the Disobedient, he has been represented in the Hundred Best Slavic Novels selection. He is the winner of the most prestigious prose awards in the Republic of Macedonia: Nov­el of the Year in 2000 (for the novel The Navel of the World), Racin Recognition in 1993 (for the short stories collection Frescoes and Grotesques), Stale Popov award in 2000 and 2013 (for the novel The Navel of the World and the novel The Daughter of the Mathematician). Andonovski was also winner of the Dimitar Mitrev award in 2011 (for the theoretical book A/Autopsy of Theory – volume 1: living semiot­ics). As a playwright he has been translated and staged in 10 different languages. His play Kinegonda in Carlaland has been chosen among 120 best contemporary European plays by the European Theatre Con­vention, and was published in French. He is a six-time winner of the most prestigious Macedonian drama text award at the Vojdan Cherno- drinski theater festival, and a Grand Prix for a play in a whole on one occasion.