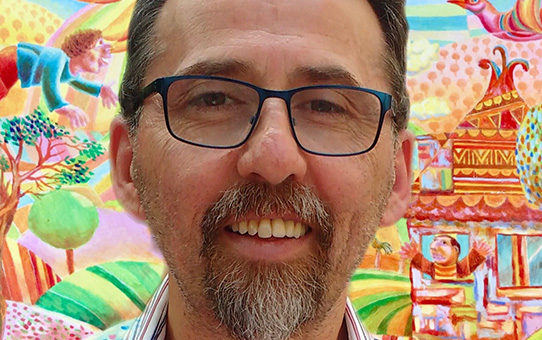 Vlado Janevski is a Macedonian-Australian writer and artist. He was born in Macedonia where he received a bachelor’s degree from the Cyril and Methodius University, Skopje. Since 1989 he lives in Sydney, Australia and travels frequently around the world, thus far visiting over sixty countries. His novel “The Dead Know Best” won the Macedonian Pegasus Award for Best Unpublished Novel for 2020. Published works: novel “The Dead Know Best” (“Ars Lamina”, Skopje, 2020), novel “Miracle around the Corner” (“Magor” / “Pagoma Press”, Skopje, 2020), novel “Under Another Hat” (“Magor” , Skopje, 2019), novel “Made in Jabana” (“Slovo”, Skopje, 2004), collection of award-winning short stories “No Return” (“Studentski zbor”, Skopje, 1985).
He has won several first, second and third prizes in the short story competitions of “Studentski zbor” and “Nova Makedonija”. With award-winning stories he was also featured in the short story collections “Electrolyte 2006”, “Electrolyte 2007” and in the literary magazines “Margina” (“Templum”, Skopje, 2006, 2007, 2008) and “Balkan Literary Bulletin” (Belgrade, 2007). He is represented in the anthologies “Macedonian Poetry in Australia” (Sydney, 1996), “World Congress of Poets” (Sydney, 2003) and the poetry collections “Poetic Emigrant Meridians” (Skopje, 1996) and “Hills of Longing and Passion” (Sydney, 2003).
Vlado is also involved in painting, wood carving, comic book drawing and illustration work. A series of his cartoons was published in the well-known Australian weekly “The Bulletin”. He has exhibited in Sydney and online and many of his paintings are held in private collections across the globe.