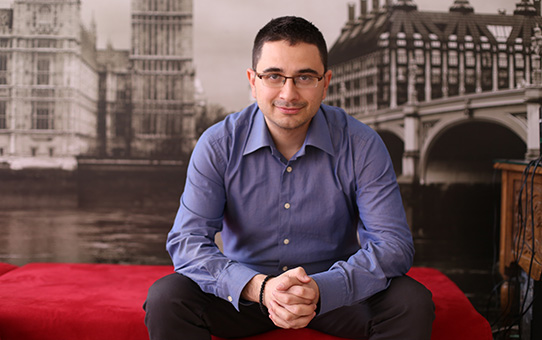 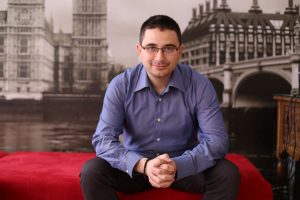 Žarko Kujundžiski is a Macedonian novelist and playwright. His short stories have been translated in different languages and selected in many anthologies in Macedonia and abroad (Croatia, Slovenia, Ukraine, Serbia, Bulgaria, USA, Sri Lanka, Kosovo). His shorty-story “When the glasses are lost” was included in collection Best European fiction 2013 by Dalkey Archive Press.

He gained bachelor’s degree in 2003 at the Faculty of Philology “Blaže Koneski” in Skopje. In 2009 he has defended his master’s degree thesis “Aspects of microfiction in the American and the Macedonian literature”, as a first longer study in the world on the subject of microfiction.

His next book was Andrew, love and other disasters (three plays) published in 2004 by “Antolog”. His second novel America was published in 2006 and has met an excellent response from the critics and the reading audience.

In September 2008 was published the third novel of Zarko Kujundziski, Found and Lost, which actually comprises two detached stories written in two distinct styles, linked by the same event.

In 2010 he has published his first collection of short stories called 13.

In his fiction works, Kujundziski writes on complex relations between the unique persons in the modern society, the impossibility of achieving full emotional communication because of the intimate shift and transformation of the distinct characters which are hypersensitive and breakable foremost, as well as occupies with the transition of material into metaphysical.

Since 1997 permanently writing columns, articles, reviews, critics, essays on subjects of literature, film, culture and society in all Macedonian and many foreign daily newspapers and magazines.

He has translated the novel Breakfast at Tiffany’s by T. Capote and together with Zlatko Kujundziski Pulp Fiction’ script from English into Macedonian language.

He is the editor of the 2010s I have a Dream book anthology, the first Macedonian anthology of the greatest speeches at all times from the world and Macedonia.

He has won many awards for the best story, essay, script and acting.

He is chief editor of publishing house “Antolog” and e-zine Reper (www.reper.net.mk).