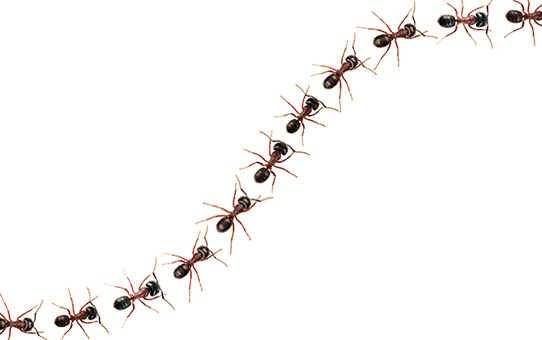 A short story by Kalina Maleska.

I wipe the bread crumbs next to the kitchen sink. I look at the piece of blue sky framed within the window. I suddenly see an army of tiny brown ants gathered around a piece of cheese. I take a wet towel, wipe them, throw them in the kitchen sink, and forget them. A few minutes later I go back to the kitchen only to see the same tiny brown ants crawling all over the bar of chocolate I left on the table. Two of them together are carrying a small piece of the bar towards the edge of the cupboard, behind which they disappear. I have not been aware until this moment that there was a hole between the cupboard and the wall, and I pick up the wet towel again to wipe them, but this time somewhat more energetically, then I wash – with hot water – the towel with the ants on it.

The following day, while listening to the news, I suddenly see the ants enjoying a drop of honey on the kitchen table. As soon as they see me, they take up a position, and march together in the shape of a tightened bow towards the narrow space between the stove and the drawers. While I’m wondering how none of them got stuck to the honey, the row of ants gradually disappears into the narrow space. I listen to the news of that day, and swiftly as an arrow I draw the knife to use it as an insurmountable obstacle to the last ant in the row. With effort I manage to catch it and throw it, this time in the toilet.

Ever since that day, I have become aware that ants do not surrender easily. When a droplet of my anti-inflammatory syrup dropped on a chair, I reluctantly discovered that the syrup was not harmful to them. On the contrary: thanks to the syrup, a few ailing ants became resilient to all ant diseases and allergies, and ever since are treating themselves not only to pieces of cheese and corn bread crumbs, but also to all kinds of leftovers – ketchup, peas, orange juice, and all else that can be found in a kitchen that is never cleaned right after the meal, but during the evening or, possibly, the day after. When I sneak up to them at night, and abruptly turn on the lights, they turn their heads towards me angrily, irritated, they run around, and disappear in a few seconds, which makes me wonder how many secret places I have in my kitchen.

A spray against mosquitos, used at the proposal of my neighbors, does not destroy them as I have been told, but increases their speed, so now, except through the hole behind the cupboard, they can momentarily climb the wall and squeeze through the space between the brown shelves and the wall, as well as through the narrow space between the socket and the tiles. The poison, bought at the advice of relatives, does not kill them – instead, it makes them gray, so now they can hide in the open, enjoying the gray tiles by mimicking them. I can already recognize their facial expression and differentiate between them – one of them loves honey so much that it succeeds squeezing through the closed lid of the jar, something the others never even attempt to do. Another can swim – while its companions drown in the water I pour on them, this one plunges and then surfaces, nibbling the pieces of garlic from the previous night.

Sometimes I am so tired that I only stand and observe them climbing the lines between the tiles. One day, when I am desperate, I ask for help: an expert comes with a bottle of special poison. He comments on something about the recent political events and turmoil that we hear about on the news – my TV is always on anyway – all the while pouring the white powdered poison on the edges of the table. I instantly realize this is in vain – he misses all the secret holes and spaces through which my gray ants move. Since it is clear that this measure is not going to work, I decide to save myself from the ants by selling my flat. I put the announcement online, and interested buyers start calling.

Several months later, unexpectedly, without the use of the inefficient white poison and without my wet towels, the ants disappear. I am joyfully walking from one room to another, phoning my friends to let them know I defeated the ants. For several nights, I get up after midnight, and swiftly turn on the lights in the kitchen in order to surprise them, but the recognizable row is nowhere to be seen. I peek in the honey jar, but there is no one there either. I turn the tap on to see if that is going to draw the attention of the swimmer-ant; nothing happens. I make a sandwich, but I’m not very hungry, so I leave a piece near the toaster, since they had occasionally been gathering around it in the past. After I watch the news, I go to the kitchen, but the piece of sandwich I left by the toaster to check if they would appear seems so small that I take several more pieces, and spread them around the stove, near the drawers, next to the sink, under the plates, in the glasses. I get up several times that night to check my traps; no one is trapped in them. It is already five in the morning when I see the ant that has the most difficult character – she is stubbornly trying the push the big piece of sandwich through the narrow hole between the socket and the tiles. I help her by slicing the sandwich into smaller pieces. The honey-loving ant is pulling my finger, asking me to help him by opening the lid of the jar that got stuck as it hadn’t been opened for a long time. I help him.

Since then, whenever I wash the dishes, a few ants squeeze below the glasses and bring them over to the sink – I think this strength to lift glasses is a consequence of my failed attempt to squash them with my fingers, which had led to the strengthening of their muscles. At night, if I forget to turn on the alarm, they move on the screen of my cell phone and set the alarm for 6 a.m. because they know that’s when I get up. When I make pizza, they grate the yellow cheese, and when I want to eat green salad, they wash the salad leaves; they know how much I hate these two activities.

One morning, before I open my eyes, I hear the news – it appears I had forgotten to turn off my TV last night. Then I open my eyes and see before me bread crumbs as large as myself. I look at the sky, but it is no longer blue; it is brown and no longer framed in the window. Suddenly, a snowflake as large as my head falls down, followed by other snowflakes of the same size. It appears to be snowing from the brown sky. People around me are running amok. Their gray color confuses me, at first I think they have become gray as a result of fear from this unexplainable natural phenomenon of giant snowflakes with strange pungent smell. Then I see they do not fall from the brown sky, but from something that stretches from a large red cloth wall before me. The cloth has letters written on it, and the huge hand that stretches from it pours down more snowflakes. I turn left and right, and see my reflection in cylinder glasses thirty times larger than myself. Oh, so that’s what this is! I evade the pungent white poisonous balls swiftly and skillfully and, while the shadow of an enormous finger stretches all the way to the kitchen sink, I squeeze into the hole between the cupboard and the wall that the new residents of my flat do not know about yet.

These last few months they have trouble dealing with us, as we do not surrender easily. The new residents cannot defeat us – they do not know the holes in the wall, or the space between the socket and the tiles, and when they lift the toaster to put poison on the table, I climb the toaster and in most cases jump adroitly on the shelf only to disappear in the narrow space between the shelf and the wall. Only sometimes I fall into the white, soft poison; it is when I hear the loud sound of the news coming from the TV – the new residents turn the volume on since in time they have come to know me well.