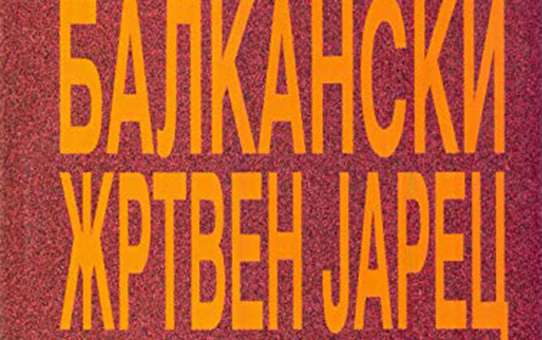 An excerpt from the novel “Balkan Scapegoat” by Luan Starova.

Shortly after, a voice came from Brussels as well. Mario Dukagjini was hired as an advisor on the Phoenix mission, with all the positive points, and a special commendations, as well. The last preparations, before leaving, were to be performed in Rome headquarters of the mission Minotaurus.

Mario, however, once again met the professor Mauricio Arbrini, who gave him new documents about sacrificing the Balkans. However, it was clear to both of them that their ideas didn’t match to full extension with strictly utilitarian goals of the professional humanitarians. Most of them went to the Balkan hell with an intention to hang some medal more on their chests. It was Mario who was left with the most difficult, practical part of the mission.

After long preparations, the day for final completion of the team was scheduled.

In the ceremony hall in the headquarters of Minitaurus, Mario Dukagjini recognized a few humanitarians from the exam, and there were also some of those who hadn’t passed the exam, hoping someone of those who had passed it would quit at the last moment. On the front table, managers of the Minotaurus mission were sitting. Lord Brighton was in the middle, next to him – the representative of the European Union, ambassador Andre Sandstrom, and next to him was the female secretary, having the files of the admitted mission members.

Ambassador Sandstrom was first to speak:

– Dear humanitarians, both females, and males, I’m greeting you in the name of the European Union at this solemn and working moment when the team is being put together. Each of our mission on the Balkans, which are in flames, could be of historical meaning for our continent.

The war is spreading, the number of innocent victims is in increase, but the war is threatening to extend over Balkan borders. However, you are still honest and brave humanitarians, and your basic task is to deliver humanitarian aid for the victims, especially in regions where it is desperately needed.

To Mario Dukagjini, who was sitting in the last row, the beginning of the speech seemed to be pathetic. Humanitarians from the first rows greeted the ambassador with an ovation. Encouraged, he proceeded:

– I, dear humanitarians, wouldn’t like to linger on the goals of the mission. You have become very familiar with them during the exhausting preparations, and many of you already have bigger humanitarian experience. But now, I would like to introduce you the members of the mission.

First of all, I have the honor to introduce you the Commander, Colonel Salvatore Bahamonte.

The introduced one stood up, as if being commanded, a real colonel. He gave a soldier salute, standing still while the ambassador continued the introduction:

– Our Colonel Bahamonte, a praised humanitarian from many war zones around the world, now faces perhaps the most difficult mission. He is very familiar with Balkanians. We have a great confidence in his professional ethics. After this mission, our colonel will deservedly retire.

Colonel Bahamonte was still standing upright, as if in front of his general, and after the introduction was over, he saluted again.

– And now, let me introduce you – the ambassador Sandstrom proceeded – the humanitarian Cornelia Baldini. Her chest is decorated with medals from many missions around the world. Wherever she was, she was exposed, as well as the locals, to threats and traps of death.

Cornelia Baldini bowed with dignity, followed by resounding applause in the hall.

– Let me introduce you, now, – the ambassador spoke up – Mario Dukagjini, from Calabria, the elected advisor for issues of anthropological nature.

Some humanitarians looked at each other with surprise.

“What is doing now this young man, and on the top of it, an anthropologist, among us?” –colonel Bahamonte whispered to the humanitarian next to him.

Ambassador Sandstrom seemed to have a hunch for the dilemma in the hall after mentioning the anthropologist Mario. He proceeded:

– You are certainly asking yourselves: why would an anthropologist be chosen for the mission? We had decided on this option for two reasons. The main goal of the mission, as always, is the delivery of humanitarian aid. But we have to find out how Balkanians react to war. We have to figure out the mentality of victims, as well as of those who cause their sufferings.

There have been suggestions from top managing circles in the European Union, fortunately, marginals, according to which, Balkanians, in the war with each other, don’t deserve our bigger attention and military engagement. According to that circles, it would be best to have them isolated, to have them stuck with their archaic past, to have them stuck with their impulse towards sacrifice. And after they get exhausted by that, we would approach them, peacefully, passing to them our European civilization.

Mario Dukagjini was pretty familiar with that attitudes from conversations with professor Arbrini. But now, he was listening to the ambassador with all his attention, because what he has said was more open and radical than the calmer views of the professor. He was waiting for the ambassador to finish his speech and to proceed with his introductions. However, Sandstrom was following his own thought:

– But we, the larger part of the leadership, do not accept these radical views. Our strategic goal, on the Balkans, however, remains on the first phase, strictly humanitarian, so we could ease their sufferings.

Let’s show these people that Europe hadn’t forgotten them! We must understand Balkanians to the full extent, so we could better understand ourselves, as well. Let’s understand the complexity of their mentalities, the drama in their lives, with all differences…

In the European Union, in agreement with our NATO allies, a military intervention is not excluded either, in case pro-fascist nationalist aggression does not stop spreading.

However, let’s make it clear: Europe has been looking for a peaceful resolution of Balkan conflicts. Maybe, it will be more clear to you why you have a humanitarian for anthropological issues in your mission, as well!

Mario was still standing in his place. He was expecting the end of his introduction:

Ambassador Sandstrom proceeded with the introduction:

– Dr. Gerard Palmier from France and Dr. Peter Neuman from Germany are among the admitted humanitarians, as well.

Gerard Palmier was the first to stand up, cordially greeting the audience.

– It wasn’t difficult – the ambassador said, – for the commission to select Gerard Palmier, a university professor and neuropsychiatry expert. He is very familiar with the Balkans, especially with its Adriatic coasts. In France, the reception of many suffering Balkanians saved from massacres, especially children who have lost their parents, has been organized by him.

While the applause for Gerard Palmier wouldn’t stop, ambassador Sandstrom proceeded with the introduction:

– Brussels Commission has chosen Peter Neuman for various reasons. Although he has taken a part in few humanitarian missions,  some other qualities were crucial for him to be selected as a member of this mission. Our humanitarian is a philosopher, a great expert of Emanuel Kant’s work, and he is considered to be one of the best experts on European birds. Being driven by this passion, he cruised through the Balkan mountains a few times. In the end, I’m introducing you to the helicopter pilots of the mission Phoenix, Dr. Giuseppe Lombardi, and Alberto Rinaldi.

Pilot Giuseppe Lombardi was the first to stand up. He had a Herculean stature and energetic look. He had a leather pilot uniform on, as if ready to take off.

– You would hardly believe – the ambassador followed up, – after telling you that our pilot is a well-recognized linguist. He speaks the major European languages, as well as all Balkan languages, with their main dialects. After finishing his university career, he got indulged in his two passions: piloting and humanitarian actions. Although in his eightieth, he not only doesn’t stop piloting small and large airplanes and helicopters, but he also often participates in airplane competitions, astonishing the public with his acrobatic endeavors in the sky. A pleasant atmosphere followed in the hall and huge applause resounded.

In the end, the co-pilot and helicopter mechanic Alberto Rinaldi, who was not only an aeronautical mechanical engineer but also a friend of Lombardi, his co-pilot in many other shared humanitarian missions, was introduced.

Ambassador Sandstrom, using carefully chosen words, finished the introduction, which was followed by a standing ovation from the audience. They were all standing, incessantly applauding. Waiters entered the hall, wearing trays full of Champagne glasses.

Lord Brighton was the first to take a glass, before saying:

– My dear humanitarians, let us make a toast to the success of your mission in the Balkans and to the hope you bring to the people affected by sufferings from bloody conflicts.

From all directions were heard glasses clinking and buzz of toasting.

Lord Brighton, after taking a sip of his Champagne, proceeded:

– You, from now, dear humanitarians, represent a small selected company, in the important mission that should show our power and our unity regarding the help we should give to those who suffer…