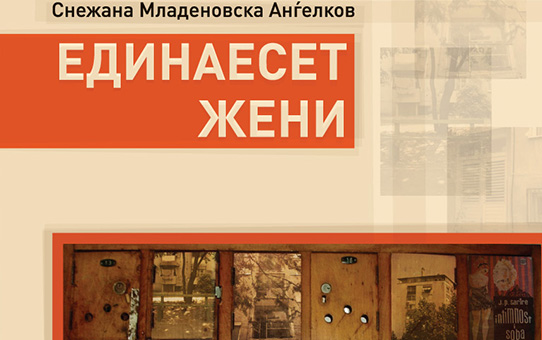 An excerpt from the novel “Eleven Women” by Snezana Mladenovska-Angjelkov.

Aunt Darinka was the first woman in our neighborhood to drive a car. White “Zastava101”, the pride of our country. She worked in a court and was a friend of justice, so at least she talked about herself. Every working day at 4 pm she would park her “hundred-one” half a meter from the bench where we were sitting, licking “Gringo” or “vitamin C”, which we, the children affectionately called “Vitamince”. When she would get out of the car, the smell of France would reach us, as she used to say when asked what kind of perfume she uses, mixed with smoke from the whole box of “Lord”. She would always hold a bag in her hand, from which small packages with the logo “Kraš” could be seen.

-Oho-ho, “Carolinas”, – we would imagine and comment out loud.

-Well, of course, not acid to rip your stomach open. Do your mothers know what you are eating?

“They know,” we would answer in one voice.

– “They know, but they’re not doing anything. ‘Give me a birth, mother, and throw me in the dump.’ Such are your mothers.”

We did not understand the magnitude of these words, we thought it was a joke, not an insult to our mothers, who, honestly, cared too much about us. There was always a parent to watch over us, only from afar, and not to bother us in the game. This practice has suddenly appeared, probably after that event with cigarettes, when Uncle Dragan put an end to our passion.

Once we saw Aunt Darinka getting out of her car with a cigarette. She was very excited, probably because of some lawsuit. While she was taking the bag with the “Kraš” packets, her cigarette fell between the front seats. She quickly picked it up and threw it out of the car. We were still sitting on the benches, and the cigarette rolled down to us on its own. It was tempting, with remnants of brown lipstick, and it smelled very nice. It smelled like France! We waited for Aunt Darinka to leave, and then we threw ourselves into the cigarette. I had the honor of smoking the most of it because the greatest injustice was done to me by my parents, who were non-smokers. Everyone else had already inhaled smoke or two from their father’s cigarettes. That moment was magnificent, it marked the beginning of a new life “in search of cigarette butts.” We would pick up everything still usable that came our way, even those brown KD-short homemade cigars. We would also smoke those cigarettes with chewed filters while imitating people who owned the unfinished cigarettes. We did all this behind garages, away from the eyes of the adults.

One unpredictable event put an end to our Bohemian life. The Galichnik Girl’s father had noticed that his cigarettes were disappearing from the box, so he started counting them, and the Galichnik Girl was so addicted to cigarettes, not so much to smoke them, but to take them without being noticed, so she went too far with her activity. He caught her and beat the hell out of her with his belt. The Galichnik Girl then started to hate Uncle Dragan a lot. She became much more cautious, so did the rest of us, because we were afraid that someone could tip off our parents about us. Sounds of a real piano were often heard from Aunt Darinka’s balcony. I really liked to see Aunt Darinka come home after a hard day and sit at the piano, relaxing with notes from the Moonlight Sonata. I wanted to play too, but my mom wouldn’t let me. Due to her excessive caution, I was left in the dark. I think that the teacher Borče is to blame, who privately held music lessons in his home. He was accused of child abuse.

Aunt Darinka especially liked court disputes where she could brutalize defendants, especially when it comes to men who have committed offenses against children. It was the same with the case of Milan from the C5 building, which was later talked about by all the neighbors. He was not very old, he may have been around 30 years old when he attacked Metka from Slovenia in the hallway of the building. Showing her a mouse tattooed on his right upper arm, he prevented her from going down the stairs, then pulled her into the basement and raped her. After a short time, Metka moved away from our neighborhood, most likely her parents returned her to Slovenia, and Milan received a harsh sentence in Idrizovo, for which Aunt Darinka personally advocated. We fully understood her need for calories from “Kraš” and soothing Beethoven’s notes. Once the Galichnik Girl and me, under the pretext of her giving us water, climbed at Aunt Darinka’s. We entered the hallway and started looking around. Aunt Darinka came from the kitchen with two glasses of water in her hands. As we slowly let the water pass through our throats, we managed to see her making herself comfortable in the bedroom. She took off the dress under which she was wearing a lace petticoat and put on a plush red home dress. Then she went to the dining room and from the crystal bowl that was on the glass table next to the piano, she brought us two sweets, wrapped in blue paper with “snowflakes”.

Icy cubes! Me and The Galichnik Girl rejoiced.

-“Icy at room temperature, sure” – Aunt Darinka laughed and started coughing from the thick secretion of cigarettes in her throat, – “take it, because no one will buy you this kind of pleasure at home.”

– “They definitely do. Otherwise, how would we know what it is…” – the Galichnik Girl got a little angry.”

“Come on, get lost now, I want to rest,” Aunt Darinka said, slamming the door behind herself.

We went outside and decided never to go to her for water again. And not only that, she deserved a bigger punishment – not to be greeted on the street when she passes by. We would turn our backs on her when she would arrive with the “hundred one”.

– You little brats! That’s how you thank me for giving you food and water every day.

– If we’re brats, then you’re a cow. Luckily, you don’t have children, because they would have been the most unhappy children in the world for sure.