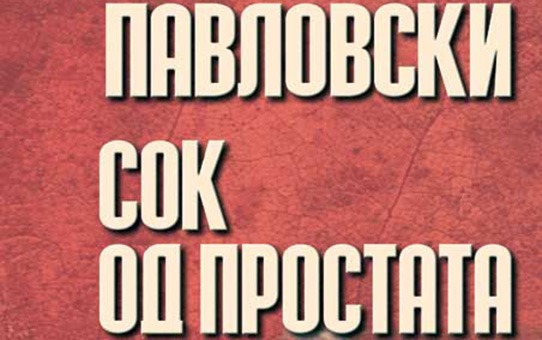 Excerpt from the novel “Prostate Juice” by Jovan Pavlovski.

Afternoon, April 8, and the memory for Ljubov Alekseevna Gorchinova

-May I speak to Risto Zmiski, please?

It wasn’t even two months since they had arrived in Moscow. As if he was still walking on the Moon. The ringing of the telephone awakens him and Vaska. It’s late, close to midnight.

-Who would be calling that late? – Vaska Bikova asks.

After that to the female collocutor on the other side of the phone:

-Its’ been a few months since Risto Zmiski doesn’t live in Moscow.

-So, where he is? – the silk is stretching on the other side.

-He is already in Yugoslavia. It’s been a while.

-He won’t come back soon?

-I think he will. And who is asking for him?

And again, that unwrapping silk.

-I’m Ljubov Alekseyevna. An old acquaintance of him.

-I’m not from here, You know. Moscow is my layover.

Her first lie between them.

-If you stay here for one or two days more, I’m expecting Risto to arrive in Moscow the day after tomorrow.

His first lie between them.

It’s not him, but her saying:  You have a beautiful voice. Your Russian is very good. Are You Macedonian as well?

-It’s my pleasure for having this conversation. Goodbye.

And it was all.

-Some bit of skirt asking for Risto.

-An old pussy trick – that’s what every whore does: Is Risto there? And then, one word after another, to the first meeting with the newcomer.

He is surprised by her logical thinking. One word after another and a first meeting!

-It’s maybe KGB checking on me – he says.

She, as always, is confident in herself:

-KGB doesn’t give a shit about you!

And, before falling asleep, again:

-If you didn’t like that conversation, you wouldn’t stretch it out that long!

It was in the first weeks when Vaska Bikova had been trying to adapt to this city. She indifferently shrugged even then, in Skopje, after he had told her he is going to apply for a representative in Moscow.

-Skopje is fine for me and the children, too! – she was categorical.

Even after a few long, tense, bilious, nervous, intermittent, oh and no conversations, she told him:

-My last word: I would go there for a few months and see – if I adapt: OK, if not – I’m going back! The kids have been already university students, I have a nice job, a circle of friends, acquaintances, and you – as you wish!

She spent the first two months in Moscow and that was the maximum she could take. They would have dinner in “Nacional”, in “Intercontinental”. They have been regular guests in “Starry Sky”, they would visit “Visotski” bar, in the long afternoons they would be sitting in “International”, but, however, she told him one afternoon:

When he was accompanying her to the Sheremetevo, he felt some joyful indifference for her departure. He was absolutely certain: she felt the same way. They didn’t even kiss on the leave-taking. Vaska Bikova was preoccupied with how she would carry across the border all those things she had purchased for these sixty days, she was excited, anxious, she was particularly worried about the cobalt tableware for twelve, which she had to carry in her hands, and it was devilishly heavy. On departure, she couldn’t help herself but tell him:

For the first time after a while, Angel Bikov smiled. At one occasion, some of his precursors in Moscow had told them he would reveal them the three truths of this city: the first – 100 kilometers for Moscow isn’t some distance at all; the second: in Moscow, during the day, you can finish one job only, and the third: gonorrhea, there, in Moscow, isn’t a disease!

He waved her while she, with packets, suitcases, and traveling bags, after passing the customs control,  headed to the luggage handover. He wasn’t even curious if she waved him back – he turned round and headed toward the exit. He felt entirely easy and free.

When would Ljubov Alekseeva call again?

A few days after the first call. Before midnight, again. She asked:

He would always pick up the phone because Vaska didn’t know Russian and she had not even tried to start learning the language so fast.

No – Angel Bikov said. – I have been expecting him every day.

You can give me your phone number, so I would give you a call after he arrives – he added.

His breath stopped from waiting to see if she may turn him down. Or she would tell him: Risto knows my telephone number, he will tell it to you after he arrives. However, she slowly dictated: 112-76-77.

-Call me after 10 PM. I have been working till then!

He was feeling: her voice was begging him, she wants him to call her. To look for her. And it was what excited him, straining little, cold drops of sweat from beneath the skin. He was sure he was right: Ljubov Alekseyevna has to be slender, tall, and all white, like a snowflake. Only such a pussy can have such a silky voice. You simply feel it unwinding. No, it’s not a wish anymore, but rather some urge to press his body against hers, to feel her tiny bones cracking and crunching under his bear hug. And that voice unwinding in his ear:

-I want stronger, tougher, my bear, my fucker!

Angel Bikov was in pain to be loved, to feel someone needs him, that someone wants to be with him.

And when he thought she will not ask him anything else, she whispered:

-Angel, Angel Bikov – he said and felt how completely different his name sounds at night, in a conversation. It seemed to him that she smiled. The girl started unwinding her silky ball of twine:

-Angel, like an endless beauty of the heavenly space, and Bikov like a bull –  fucker among thousands of cows that had come to the pasturage on that endless, flower area.

That’s how she had precisely said: a bull – fucker, and that was the only thing he understood from that long phrase,  because he hadn’t mastered Russian yet, in the first months since his arrival to Moscow.

He wrote down Ljuba Alekseyevna’s number on the first thing he had come across – some piece of paper from the white margin of the newspaper, by chance, left next to the phone, and took a sigh of relief.

-That whore again? – Vaska asked A. B. after he had come back from the hallway, where the telephone was sitting.

-She is not a whore, but a close acquaintance of Zmiski.

-So what does she want from you?

-To help her meet with him.

-A whore! The only thing she wants is sucking someone’s prick.

He turns her his back while he goes to bed. For the first time he gives her the right – so, was really that important for Ljubov Alekseyevna her old acquaintance, so she has been constantly asking about him? However, he should keep her telephone number, he may find himself needing it someday.