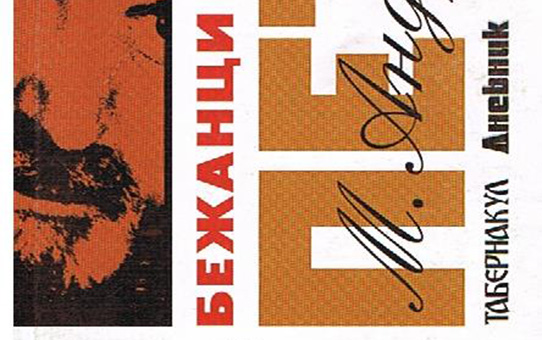 Excerpt from the novel Refugees by Petre M. Andreevski.

When I was entering the café, I wasn’t thinking about when and how I would get out. In fact, it was on me to decide how much freedom should I have. And there where my freedom was limited, I was the one to extend it for myself. Because when I don’t agree with myself, I don’t agree with anyone else.

That my behavior couldn’t have avoided the attention of one notable lady, who would subsequently put this together in a miraculous poetic description: “He always enters in a manner of a great gentleman. But when he leaves the place…! Oh, when he leaves the place, he looks like being electrocuted.” I don’t know how much truth contains her judgment because the truth is a big lie when impossible to be proven. However, there’s a lot of evidence here.

Many times I would get hurt by a usual person’s look. Especially in situations containing an “overdosed” pleasure. And I would subsequently take that look like some disdain as if my name is being changed, and my gender and the right to have a life as well.  And sometimes it seems to take away my chair, my table. Almost as if it chases me away, taking my freedom of expressing my personality. And that feeling would trigger that animalistic rage, suppressed somewhere deep inside. Maybe that’s how that old Chinese proverb was born, which says that animals have nothing that humans have, but humans have what animals have. The latter, actually, has turned up to be the reason for declaring a “state of emergency”, which would take me to almost all police stations in Skopje.

That’s where you don’t have the right to reply, the right of amendment debate. They take away your word,  your shoelaces as well as the belt, the coins, and every piece of metal you could use to kill yourself. As if they are concerned about your life. But you realize it’s them who want to kill you way more. You bet it, to kill you a few times, rather than letting you decide about that. However, they have to conduct some regulations required by the law. But there are people who don’t misuse their uniform to humiliate you to the point of changing your face and the memory of it. They have been even some funny situations.

They are taking mi into a two-bed cell in the basement. On one of them, there is already some guy, his head covered. There aren’t any bars nor glass on the little, high-placed window. Some cold autumn wind is blowing, taking your breath. It takes it from you, but it doesn’t give it to you back.

I lay down on the unoccupied bed. I wrap myself with the only, threadbare and stinky blanket. And you don’t fall asleep by any means. Your soul is shaking, your whole body is shaking. The bed is shaking as well, creaking under you. You are all shaking as if your blood doesn’t run at all. It got stuck in your tendons, veins as if it slowly starts freezing. I have myself curled up, tucking my head between my legs. But I don’t feel my breath either. As if everything is dying out, smoldering to the end. Even your breath cannot warm you up.

At one point, the man from the bed next gets up and starts thumping on the door. One policeman comes and unlocks it.

Come along, the policeman says and locks the door again. I get up, take everything from his bed: the blanket, the pillow, even the mattress. And I put it over myself. I’m so sensitive to the cold, that it appears to me if they throw me into a fire, the fire would go out.

The policeman returns the man and locks the door again. The man tries to lie down, being astounded before the naked bed. I don’t see him, but I have a hunch he doesn’t know what step he should take. He doesn’t say anything to me. I feel he is afraid to speak to me. He doesn’t know what is going to happen if so. According to my experience, this man is surely a member of some busted gang of punks. It’s only them and animals moving in groups, flocks, and packs. If you come across such a gang, your only chance is to strike first. And you don’t hit anybody else, but the gang leader. Knock him out first and the others would run off immediately.

The man looked around the naked bed a little bit and decided to thump on the door again.

-What happened now? – the policeman asks while unlocking the door.

-Someone has stolen everything from my bed.

-So, who would steal it? – the policeman says, turning on the shimmering flashlight.

-How do you mean, you don’t know, it’s just the two of you in this cell. Come on, give him the bedding back, he says to me, uncovering my head.

I sit on the bed, before saying to the policeman:

-Comrade policeman, if he doesn’t know who has taken it, neither do I. It could be me, it could be someone else, I tell him. The policeman doesn’t see through the dim light. He doesn’t see, like a spider without a clear picture, due to the insufficient number of photoreceptors.

-You motherfuckers, the policeman says, and starts giggling. However, give it to him back, it would be a pity for him to end up frozen. And I hear, I don’t know after how many times, he locks the heavy door of the basement cell again.

Back then, there was something like unwritten, but obligatory duty to visit all the famous cafes in the city. To see, to be seen. One night, it was the buffet in Vardar film yet to be visited.

I met the cameraman Branko Mihajlovski and the producer Panta Mizhimak at the door. I get in, they get out.

-Who the heck writes your books, – Branko says – since you are in café all the time?

-Thank you for being jealous, – I tell him – because one has to deserve it as well. And as far as writing is concerned, I never write. I have hired a group of laborers to work for me only. I don’t pay them. I only tell them what and how to write. And they do it as homework…

Panta, without hesitation, confirms. And he bursts out laughing with his high-pitched throaty voice, which could cover a radius of a whole suburb.

I’m in the buffet, almost alone. There are only three people not far from my table. They are all talking, but no one is listening to anyone. I want to join them, but I don’t know any of them.

Then I remembered that today is St. Nicholas Day and that Shishe celebrates this holiday. Shishe is actually Dimitar Spasevski, but no one knows him by that name. Except for his parents, of course.

I finished my vodka, before approaching the people.

-Boy, bring me a double-fueled rocket.

-Would you like me to take you somewhere for a visit? – I ask them.

The people look at me, then they look at each other. As if they are seeing each other for the first time. After a brief calm, they ask:

I have them seated in the car, then I give them a drive to Karposh 4. I bring them to the 10th floor, in Shishe’s flat. I greet him with the holiday and get out. They will silently look at each other with the host for a long time. They don’t know where there are at, neither Shishe would know how to ask them. There are moments when people are ashamed to ask something they shouldn’t.  He looks at them, as they are illegals. Or asylum seekers, to say the least. After a few shots, he would overcome his shame to ask them:

-Who the hell are you, I beg a pardon?

-To be honest, we don’t know you either.

-Who brought you here? – Shishe asks.

-We don’t know either, –  the people say, – he has only entered and exited.

-What if he had jumped off the balcony? – his wife Ljuba asks.