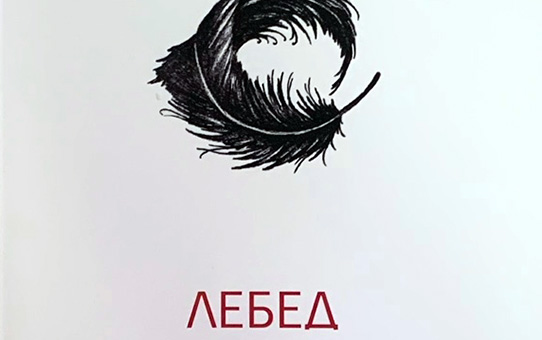 An excerpt from the novel Swan by Ana Stojanoska.

She is standing in the dark in front of a narrow corridor, sideways from the stage. Enough light comes from the stage so she can see Gabriel well. She stands in a dark aisle and watches. She watches him as he prepares to take the stage. She looks at him as if looking through a film lens. The play of light and shadow is reminiscent of some old movies. Film-noir. Gabriel turned his back. The upper part of his body is naked. His muscular torso is visible. Every muscle trembles. Slight squinting when breathing. One drop of sweat is slowly sliding down between the two shoulders. He is concentrated. He takes a deep breath and stretches. He sways his neck from left to right. From right to left. Several times. A famous move brought to perfection. She watches him as he waits to enter his stage. She holds her breath, almost out of breath. She likes watching him. She loved watching him. She loved watching him all the time. She loved watching him for no reason.

Simply, the world could not exist if she did not watch him. She was watching. While he is rehearsing, performing, running, and getting ready for the performance. She looked at that aesthetically modeled body that she wanted so much. And she couldn’t resist every opportunity to hug him, touch him, leave a part of herself on him. She wanted to watch him because she knew she would be able to play the best she could. And notes will then open on their own, and the fingers will cause conflict and an explosion of emotions. That all that music from the inside will become a sound transformed into beauty, from the outside. She was watching him. She watched him whenever she could. She looked at him inside of herself when she couldn’t. She would put his face together like a jigsaw puzzle whenever she stood in the middle of playing when her fingers could not keep pace with the score, whenever there was a lack of motivation to keep playing. Gabriel was a stimulus, a motivation, a muse. His play was the primary impulse for the music she played.

She loved watching him.

She felt her palms and their clenching. The music from the backdrop was reaching its climax. Such live performances were beautiful when the orchestra was controlled and precisely led by a top conductor. Gabriel was perfectly calm. He waited for the last blow of the percussion instruments to get in. His calmness melted with the universe. She couldn’t say the same for herself. She was shivering, that’s obvious. Her need to play was gushing from every inch of her body. To touch the piano, to feel the keyboards. She loved to play. Now and here. Still, she remained in the shadows on stage. One tear rolled down her cheek. Not! She must not cry!!! She felt someone else’s hand on her shoulder. Please sit in your seat. She will.

And she will watch him. Same as before. Then she will enter his wardrobe and hug him, so wet and sweaty. And she will happily sink into his tall body. She adored that body from the first signs of youth on it. What a body!

However, she will not sit in her place. A tear would mean weakness. And he is not supposed to see that weakness. She knew that, while dancing, he would look at the audience. “No, I won’t let him see me as I sink into my weakness.” She will be waiting for him in the dressing room. She lit a cigarette in the hallway. Two ballerinas waiting at the exit enthusiastically talked about Gabriel. They were delighted by the way he danced and levitated towards infinity. “So do I,” she said to herself. “So do I.” In love, as with a ballerina. Only this was love. Pure love. Unknown to many. Love in its original form. She smiled. She looked at him. He danced as he always used to, perfectly connected with the music, showing the audience how a ballet dancer can tell a story. She wanted to play. No, she is not supposed to play now. Her palms! Her hands are shaking, and nothing can calm their emotional explosion. She shook off the ashes out from the cigarette. She went into the dressing room.