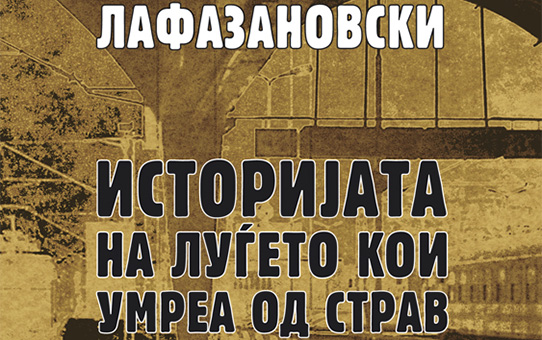 An excerpt from the novel “The History of People Who Died from Fear” by Ermis Lafazanovski.

After Marek, while still being a boy, had come to Skopje for the first time in 1970., his soul separated from the body and went back to where they both set out on their journey. For that reason, ever since, or more precisely, from the very day when he stepped onto the soil of Skopje, he came to the realization he wasn’t the same person anymore and existed in a form of the body only, so from that moment on, the city of Skopje started to change itself: Marek, not being able at all – regardless of all efforts he had been making – to speak about himself in the first person singular.

Marek wants to go back, was the first sentence he tried to say in that manner and such self-naming went unnoticed by his parents at that moment, while they were trying to take off the large suitcases from the wagon of the express, which was smoking as though expiring at the dimly lit platform, while a few curious drowsy people from the small benches were watching how the three of them, carrying their suitcases, were trying to get off through the little narrow door, being afraid of the train taking off.

After repeating his wish to go back a few times, while emphasizing his name, Hana, despite being troubled by handing out the suitcases, mechanically shouted at him to stop behaving capriciously, probably noticing that his behavior has not been appropriate for the situation they were in. After all three of them, with their numerous suitcases, along with Pavle’s big cello finally managed to unload their luggage on the platform, he, being a real chatterbox, started saying sentences one after another, in which his soul didn’t exist, like Marek doesn’t know the name of this City, Marek wants to pee, Marek has a stomachache: both Hana and Pavle looked into each other’s eyes, for a moment slowing down the clever and nervous movements of their bodies and hands that were making their first adjustments to the new environment.

We resembled rain-soaked mice. It’s true, it had been raining, it was night, the platform was stinking of smoke and overbaked oil, and strangers were hurrying around us, getting off or on the stairs of the wagons. One could see the sleepy heads on the windows, leaning against the dirty window glasses. We felt lost. At least, these were our first impressions of Skopje. We carried within the courage to discover new areas, Pavle used to say, if nothing else, remembering those days. We were Argonauts, exciting place seekers. Hah! If only that were the case! We… we were lost! And Marek’s behavior was on top of it. Marek wants to pee!

In the following years, when this ostensibly benevolent phenomenon became chronic, and as Hana and Pavle were thinking, caused by the excitement of arriving in the new city, and when they both became suspicious – though afraid to admit that to themselves – that their son has a mental illness, a team of experts diagnosed him with “obstinacism”. This diagnosis has calmed down his parents because the experts had told them his behavior wasn’t some kind of mental illness, but rather obstinacy – because, if that had not been the case, he would have had these symptoms from an early age when a person discovers themselves as a subject. Obstinacy for what? Obstinacy from what? Well, it’s unknown, and that’s why it requires treatment. However, the experts said there were great chances for him to be cured successfully, only if treated properly. After all, the experts consolingly proceeded, a lot of celebrities in their speeches have been talking about themselves in the third person singular, which wasn’t an obstacle on their way to becoming military commanders, famous politicians, athletes, or actors. Of course, such behavior was typical for people with psychosomatic, or multiple mental disorders, which was not the case with Marek.

Unfortunately, neither of the experts was able to find the exact remedy that would have Marek cured immediately; he only needed to go back there, to Karlovy Vari, Prague, or Albrehtnice on The Vltava, and other small places in the Czech Republic, where his “I” returned at the moment they got on the platform, leaving his body alone, in an unfamiliar city, in an unknown country, among strangers.

From this perspective, while Marek doesn’t recall these years, he comes to the conclusion that his life in Skopje had been painful research only, maybe a yearning for uniting as well, a feeling that somewhere on the Globe, and possibly in the Universe as well, in the Space, he has a twin brother without his own body – in which he would find a place – and he has been suffering because of that, not less than Marek. There has been a significant probability, Marek thought back then, that his double is hanging over somewhere in the high Tatra Mountains, trying to locate him from above and get inside him. In case that was true, his soul had separated from him in Prague already, while boarding the train, and didn’t come with him, and his parents at all, which means only one thing – they both are separated by vast territories, mountains, rivers, seas, and lakes – that they may not see each other anymore.

Upon our arrival in Skopje, Marek was neither a child nor a young man, or both, therefore he wasn’t interested in where he was, or what this city was like either, neither if it was raining – and it was raining – nor where he will be going to sleep, and where he will meet the dawn because staying for long wasn’t in his plans. This city should have been a layover for him only, and that’s why he was indifferent; that’s how one feels while waiting to change trains to reach the planned destination. He was more than sure that, if not today, then tomorrow, if not – a month later, after the summer is gone – he would get back to where he had set off, which would make him extremely happy, or continue further to another town, maybe in another country, until he grows old and becomes tired and says to himself: I’m done, it’s about time to settle down, or get back, whatever. However, the first thought was calming him down much more. Even before setting foot in this town, he knew nothing about – not even if there were any children there – he was dreaming about what his return would be like: he would wear a sailor hat (that is the truth that shouldn’t be changed), he would have a white sailor suit, and he won’t laugh. After that, at full length, he will tell everyone where he had been, what he had seen, what seas he sailed, and what types of cars (flying ones maybe) he had seen. He will have long hair, that is for sure – so after he takes off his hat, the hair length will be witnessing to all who had known him for his absence from home: if hair grows one centimeter per month, something he wasn’t sure about, the length of his hair, after returning, would be a proof that he had been absent for more than six months, a year, maybe. After that, he will have his hair cut short and will keep his hair that way until everyone learns he had been abroad, after which he will continue to live a normal life. He may look for the hidden things too, things he had hidden in safe places, so nobody could have taken them while he was absent.