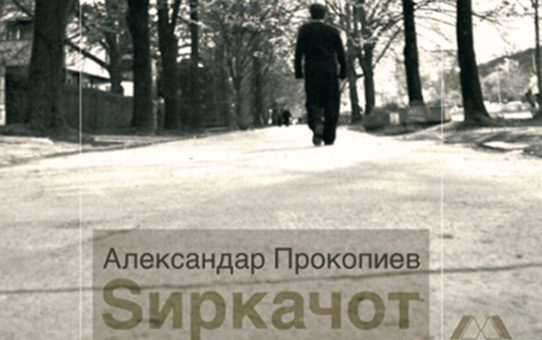 An excerpt from the novel “The Peeper” by Aleksandar Prokopiev.

Let me tell you and you tell me. When are we finally going to speak on the phone? How
many more hours do you need to wake up? And then? Are we going to go away at least one more time? Or are we just going to meet for coffee? The words sound different when spoken aloud. But if I whisper them they can’t be heard. No, I won’t take anything. I only want to fall asleep. For your ‘good night’: a scratch, a cotton ball soaked in St John’s wort, and iris, in your home, in my no-home… Birds crawl across the face of the full moon like ants. And then, what else can I do but moonwalk!
What? 00:23. So what. Time can gallop if it wants to, recklessly, wild, let it rush, skip the years, believing that it can cut me off from you, but I am getting closer, and you are ever smaller, stepping high, as if you had springs on your feet, fragile, while the sunflowers, delicate themselves, dotted along the right bank of the Vardar, turn towards you. All these whizzing years are in one same day, one same night, in one same midnight, one same morning, then, when you were little, and now when you are not, but sill smelling of seaweed even though the waters are subterranean.

And the birds that call at each other are seagulls, or at least bear the mark of the sea within.

When I stopped seeing you, when you left, when I lost you, did I lose myself too, did I stifle a part of myself and obscure it in some remote corridor of mine? But what could I do?

Sticky and in a rush, I drag myself through Skopje, I peep into its porous details, I relive those useless moments, those specks of dust, those phantoms of phantoms. The little train to Saraj has disappeared, the photographer’s shop ‘Memento’ has disappeared, too, in their places new buildings are replicated, with their fancy facades and entrances smelling of piss, and I am
content with the minor catches of the everyday, I melt in the instant news…

00:40… there, the dustmen haven’t arrived yet, and the rubbish is piling up, it swells and spreads, and no one can escape any more, not even the eagle with lion’s paws that fulfills every person’s desire. This is not me, this is not my name, you say, and you? Who are you?, you say, don’t you know, were you the daughter or are you the mother, all the same, don’t be funny, haven’t you recognized me, I have been with you since ever, since you were dressed in a pink blouse and white turned up shorts or in a sleeveless dress buttoned up from behind, all the same, perhaps my tongue starts
wagging when I am alone and then I carry on with ambiguities, from head to toe, but it is me, the one that’s yours, don’t be funny, there…00:42… the dustmen are not coming, have they changed their minds tonight, so what if they are not coming, the rubbish inside us is greater than the rubbish outside, this is not sarcasm, I’ve never been sarcastic, I’ve never hurt people, I haven’t bitten off flesh, but most of it has already been done, and I can’t leave alone all that they say does not exist anymore, I might be unaware, perhaps I don’t know myself, but aren’t we all unaware, more or less, even the truth and the lie are unaware, they get caught easily, and I
repeat, you’ll be in my life to the very end, to the end and beyond, in the next life, even only as an episode, as a story, and I’ll keep you in there, even when they lock the doors between us, as they have always done, dumbheads! Rhinoceroses! Bullshitters! Nation of frogs lying low in the mud, what can they see, what can they imagine… my beautiful…

00:45…the masks are falling the shades are multiplying the sun is in a cell the moon is marching as a legitimate target along its night path just so it’s all the same, and where I am here below the lowest the master of the mud I have my own lifeline I have a stage-trained eye to observe the weakness of the marionettes the life of the termites while being a blind man myself a
vagrant myself necropolis lameness swallowing soft morsels servants winter deserted fairground with sagging carousels frogs in a pond cracked pine-cones…

Oh my guard, you fool!

He is in water up to his knees. Beside him, five women and the sixth, the instructress, exercise aqua-aerobics. The left elbow should touch the bent and raised right knee and then the other way round—right elbow, left knee. And then repeat the same again. The water helps, he guesses, by making the movement of the legs more difficult. No, no, the back must remain perfectly straight, as well as the other leg, the high-pitched voice of the instructress yells over the fairly loud rhythm of the disco music coming from the tape recorder, anchored in the sand of the beach. Now the women hold their hands together and squat in the water as if they are going to play ‘duck duck goose’, and then. Still holding hands, they raise unevenly, nudging each other and laughing. A few meters deeper, he can see Jana playing with the plastic dolphin. The dolphin’s head and front fins are light green, its smooth body is blue and its stomach is dark yellow with blue and green dots. To match the rest, its eyes and smile are in the same yellow colour as its stomach. Reclining over the dolphin with her extremities outstretched, Jana lolls together with the dolphin on the surface of the sea. There is something else—in the sea Jana does not wear the glasses she has to wear when ‘on land’ for correction of her eyesight from her sixth to her fourteenth year. This absence of glasses adds to her distractedness a sort of foggy optimism.

Amongst the photos from that summer, this one is his favourite. She with the smile of an underage sphinx, and the dolphin. Is it appropriate for an adult to masturbate over his fantasies? Of course it is! Oh, my guard, you fool! I don’t have to lift my right hand to swear that I’m telling the truth: I am Don Huan de Marco, the greatest lover in the world, and I present myself self-assuredly, regardless of the mind-numbingly anonymous ‘factual’ documents of the birth certificate type. They mean nothing to me. I can live my choice devotedly and with delight, I can enjoy in you. When I arrive in the casa, the nurses will start promenading on the lawn time and again, barely touching it with their feet, while the black male nurse will urgently leave for Spain to learn Flamenco.

There are so many ‘accurate’ people who cut the time into small fractions. And they don’t know or they don’t want to know that everything will happen anyhow and anyway.

Do you know what’s new? Pero, the fat son of our neighbours, has become a
gynecologist, a professor. Overnight? Yes. And his brother, the even fatter Kole? You won’t guess. A painter. From time to time, when I sit on the bench in the garden, he’ll ask me, as if in passing, dressed up like a dude in a Levis jeans jacket, white linen trousers and a denim rucksack: Are you OK? I’m really glad you are fine. Judging by this geographical longitude an entire hour has passed after midnight. Or perhaps several more dozens of minutes have expired, so it is ‘a new day’ already. He was never unambiguous about the minutes, even when wearing an electronic wrist watch. He was born at
11:28 AM (particularly important information when calculating the natal horoscope). He died (as a pensioner, but still at his desk, revising the 15th edition of his biology textbook for the second year of high school) at 8:07 PM. Someone calculates, correctly, to a second, the length of the life of the citizen A.M.. Loading and unloading. At the very same second, one more future citizen was born, who in a few days gets the same name, A. and the same surname, M. He also is a child, soon to become a grown man. As in the story about the fat snowflake which will certainly melt, despite appearing so full and voluminous before our eyes. Everything is poignant, but
natural. The dispassionate registrar, whose intention is not to remember numbers and names but simply to record them (he is immortal, is he not, holding different times, epochs and eras within), has to spare a tiny moment to reflect. But coincidences are so common, so alike in fact.
The dustmen are coming. Unloading the containers. Loading the rubbish dumps. Necropolis. This morning I missed the metonymic ritual—I didn’t cut off a strand of hair. Again those filthy images. Lameness. Swallowing soft morsels. Servants. Winter. Deserted fairground with sagging carousels. Frogs in a puddle. Cracked pine-cones in the mud. I heard the voice from the dictaphone and I thought of you, and then everything got confused. Unable to concentrate. The news about the death of yet another young girl from leukemia. V., from one of the neighbouring streets named after cities from the former alliance of the non-aligned countries—Baghdad Street, Cairo Street, Beirut Street or somesuch. The night before she died (at X o’clock and Y minutes): ‘I will become an astronaut and visit Euro Disneyland’. Just as in the unconvincing Hollywood melodramas, less than ten days ago she won an award at an international harp-playing competition. How old were you when she was born (you are both Virgos)?