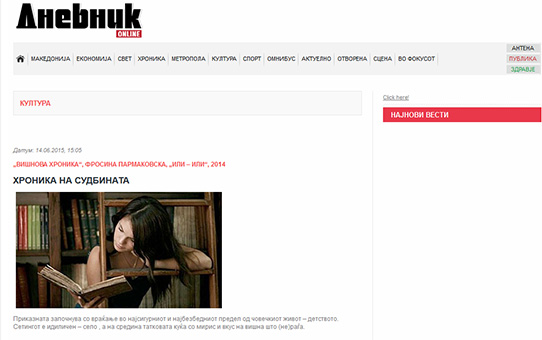 In the beginning, the story goes back to the safest and the least dangerous period of human life–childhood. The setting is idyllic–a village, and in the center, there is the father’s house, that smells and tastes like sour cherry (trees) which (don’t) bear fruit.

This is how the novel “Sour-Cherry Chronicle” by Frosina Parmakovska begins. There are evident gradation and chronology in the book which in a way justifies the “chronicle” in its title. The chronicle follows the life of a young man throughout his childhood and adolescence, which is narrated by and seen through the eyes of the main male character.

From the idyllic atmosphere at the beginning, throughout the teenage melancholia and turbulence, the novel seemingly offers an exciting and romantic walk to the very end.

At first, everything revolves around love–the first, the most sincere, and the childish one. The narrator engages the reader throughout the incredible narrating ease, and in addition to that, there is a good depiction of the remaining characters.

The chronicle extends across a long period of fifteen years. News about tragic incidents whose “intrusion” enhances the reader’s curiosity is included besides the love-related events. The “Sour Cherry Chronicle” is interwoven with the latest news. The pieces are similar to newspaper articles or police reports which are accurately depicted, and therefore, the reader gains a strange desire to investigate whether the events are real or fictional, making the story credible. In this way, Parmakovska’s novel gets an interesting structure, unimposing, unpretentious, but still highly effective. The incidents are linked to the main course of events, to the characters and the actions before and after, avoiding the narrator. He witnesses, challenges and gathers them around him and they mount up to his tragedy. Therefore, the relationship between love and death once again proves to be very tempting and successful because it holds the readers’ attention and sparks their curiosity until the end. The relationship between the two eternal themes is writing out the hero’s destiny.

Besides the above-mentioned aspects, Parmakovska as a narrator shows maturity and skill throughout the characters’ development when depicting their psychological and emotional traits, their relations and the intensity of their emotions which entangle or disentangle depending on those relations.